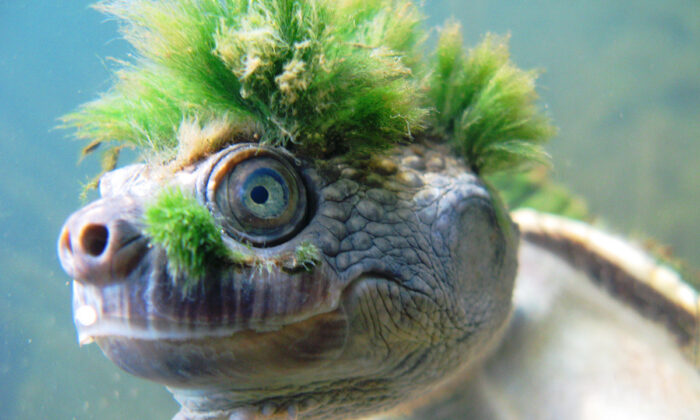 Floods came through before the eggs of the butt-breathing turtle species were hatched. (Chris Van Wyk/Supplied)
Australia

Renowned biologist and turtle conservationist Colin Limpus has said he fears that Queensland’s torrential rain in recent days has wreaked havoc on the habitat of the iconic bottom-breathing turtle.

The flooding from former cyclone Seth dumped a torrential amount of rain over the catchment of Mary River, where the turtle calls home, peaking just short of ten meters.

Limpus said that the flood has most likely drowned the nests of the eggs of the Mary River turtle, which grows shocks of algae “hair” and survives by breathing out of its bottom.

“We have had an egg loss. The flooding, it’s a very elevated level, and any eggs that haven’t hatched will have either been washed away or drowned,” chief scientist for wildlife and threatened species in Queensland’s environment department Limpus said.

“There is, however, a much greater problem,” he added.

As the state assesses the full extent of the flood damage, the future of the turtle’s habitat sits on shaky ground.

“If we take the bubs—the young turtles—they feed primarily on snails and insects and things like that in the shallows,” Limpus said.

“When you have a major flood, all of your gravel and sand and everything is being rattled around. As a result, surfaces are sandblasted with sediment, and we lose the food resource that should be there normally.”

“The early season flooding was so atypical. We weren’t anticipating it. Normally the eggs are all hatched and gone before you get your big floods coming through,” Limpus said.

Remnants of cyclone Seth have ravaged Queensland’s southeast since the turn of the year, damaging property, roads, and businesses and taking the lives of two men. The search for a missing 14-year-old girl continues.

The government scientist said that volunteers are needed to help the turtles.

“We really need local communities to want to look after their area,” Limpus said. “It’s an impossible task for the government to look after every kilometre of the river.”

The Mary River turtle is not only highly distinctive with its mohawk and interesting breathing habits but also has fleshy spikes under its chin, hence it has another nickname—the “punk turtle”.