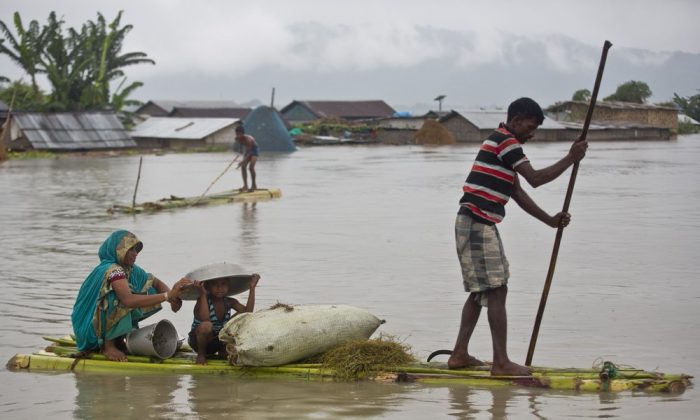 KATHMANDU—The death toll in Nepal from flash floods and landslides in the past three days rose, with dozens missing and injured, the government said.

At least 64 people have died in Nepal, with a further 31 people identified as missing and more than 2,500 rescued, the country’s Ministry of Home Affairs said on Monday morning, July 15. Search and rescue efforts have been stepped up, with multiple federal agencies, the Nepalese Army, and paramilitary forces mobilized.

Ten thousand people have been displaced from their homes as incessant monsoon rains pounded many areas in mostly mountainous Nepal since Thursday, submerging large swathes of land, inundating homes, and destroying bridges and roads across the country.

In neighboring India, 14 people have died on the northeastern state of Bihar, which lies on the India-Nepal border. The death toll there is “bound to increase,” said Pratyaya Amrit, a senior official at the Bihar Disaster Management Department, as flood waters retreat and reveal the true extent of the damage.

A total of 19.6 million people across 12 districts have been affected by the flash floods, Amrit added.

In the Chittagong division of Bangladesh there have been 10 deaths and about 500,000 displaced as 200 villages have been flooded.

In Nepal, cabinet spokesman Gokul Banskota told reporters that “the disaster has caused a big loss to the economy”. The government will make an assessment soon, he added.

Nepal Red Cross spokesman Dibya Raj Poudel said the displaced had been sheltered in schools and other public buildings.

Television channels showed roofs of houses submerged in flood waters in the southern plains and people wading through chest-deep water with their belongings on their heads.

Images on social media of the worst-hit areas, including Nepal’s mountainous Kathmandu Valley and the lowland Terai region on the southern border next to India, show roads and cars submerged in muddy water.

Officials said in some areas rains had eased but some rivers in the eastern part of the country were still above flood level. Authorities asked residents to remain alert.

The Kosi River, which flows into the eastern Indian state of Bihar, was among those that had risen above the flood level.

Nepal police official Ishwari Dahal said all 56 sluice gates of the Kosi barrage on the Nepal-India border had been opened last night for six hours to drain out 371,000 cusecs of water, the highest accumulation in 15 years. A cusec is a measurement of flow, equivalent to one cubic foot per second.

“Its water level has gone down now,” Dahal told Reuters from the barrage site in southeast Nepal.

The Kosi has been a serious concern for both India and Nepal since it broke its banks in 2008 and changed course, submerging swathes of land and affecting more than 2 million people in India’s Bihar state. About 500 people died in that disaster.