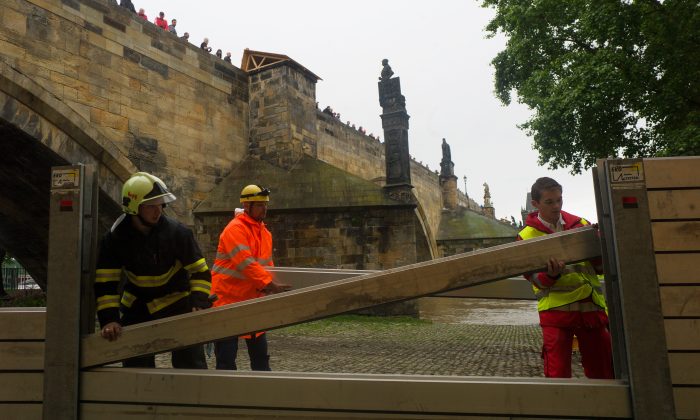 Emergency services workers build anti-flood barriers on the left bank of Vlatva River near the Charles Bridge in Prague, Czech Republic on June 2, 2013. After another night of downpours in the capital and elsewhere in the Czech Republic the water in Vltava is expected to reach critical levels on June 3, 2013. (Michal Cizek/AFP/Getty Images)
Europe

PRAGUE, Czech Republic—The Vltava River is up to distress level due to persistent rains over the past two weeks. The Prague Public Transport Company had to take emergency action.

When Vltava reached the third flood level (the highest level) Sunday at about 1 p.m., the agency decided to close eight subway stations.

The current situation in Prague recalls the massive flooding of 2002. At that time, however, the river was almost twice as high. The first notices of evacuation issued to smaller townships along the riverbanks Sunday brought back worrying memories for many.

Spokesman for the Public Transport Company Petr Vorlícek said the water is rising quicker than expected. That’s why Prague’s City Hall declared a state of emergency.

Some of Prague’s highly prized architectural sites are in danger as many of them line the riverside.

In the city zoo, the animals have been moved to higher ground as authorities are still remembering how quickly the water hit in 2002, and several rare species drown.

The local gas company shut down parts of the pipelines as well. Anti-flood barriers have been installed in subway stations, following the city’s flood-response plan.

Zuzana Andelova is a mother of two and a resident of Holesovice, one of the city’s residential areas along the riverbank that was hit the hardest during the 2002 floods.

“So far the river is quite orderly within the banks,” she said. “The authorities are saying everything is alright, but there is a difference between what they say and what people say. I hope people are just losing their nerves and the authorities don’t equivocate.”

So far the main problem doesn’t seem to be the river itself, but more so the smaller streams passing through the city.

On Sunday at 7 p.m. local time, the government declared a state of emergency for the whole Czech Republic, excluding only one county. Prime Minister Petr Necas announced to Czech Television that the Cabinet is ready to provide 300 million Czech crowns ($15 million) in relief funds.

On Monday the subway will not be operating in the city center. Deputy Mayor of Prague Tomáš Hudecek has closed all kindergartens, elementary schools, secondary schools, and high schools (except private ones) for Monday. Only universities remain in operation.

According to Michaela Pohunková, spokeswoman for the state agency Vltava Basin, the first estimate, that the water should reach its peak Monday afternoon, is no longer valid. She told the Czech Press Agency, “It is impossible to estimate when [the peak] is going to happen.”