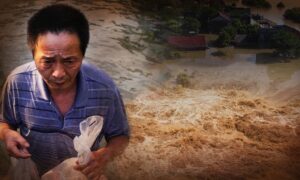 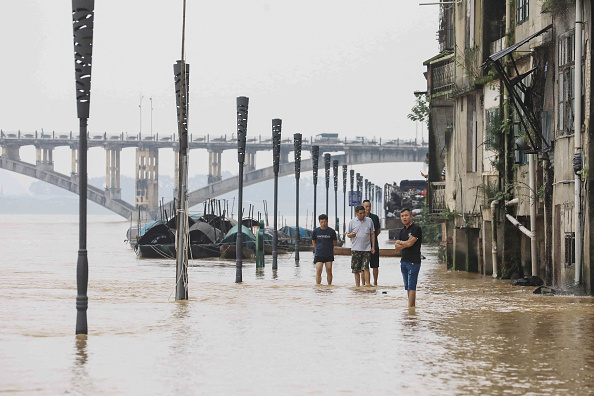 People walk along the swollen Rongjiang river after heavy rains in Rongan, in China's southern Guangxi region, on July 2, 2021. (STR/AFP via Getty Images)
Thinking About China

On July 1, Chinese leader Xi Jinping repeated his old slogan again on the Tower of Tiananmen Square in Beijing: “This country is its people; the people are the country.”

Ironically, people across China are suffering from floods, but none of the top leaders of the Chinese communist regime even bother to visit any of the disaster-stricken areas.

Floods have impacted various parts of China, such as Henan, Hebei, Shandong, Anhui, Jiangxi, and other places at varying degrees as revealed by many online videos recently. After the heavy rain on July 1, Beijing was also seriously flooded.

The regime’s media simply plays the game of ignorance and continues its report on the Red Party celebration.

Rather, the regime’s propaganda machines focus on disasters overseas.

For example, on July 4, Xinhua News had a series of negative news from abroad, such as “On Site Report: About 20 People Missing After the Mudslide in Atami City, Japan,” “Philippine Military Plane Crash: 40 Rescued,” “Cyprus Wildfire Kills Four,” and “Indonesia Daily Confirmed Cases of COVID-19 by over 25,000 for Three Consecutive Days.”

As for the domestic disasters, the communist media simply ignores the National Health Commission’s updates on the pandemic.

Xinhua also ignored the June 29 news release from the Ministry of Emergency Management (MEM) on severe heavy rains and storms warnings for the next three days.

It was not until July 2 when the same warning was issued again by the MEM.

Of course, the MEM wasn’t exactly being diligent. After the June 29 news release, there was no further report of domestic disasters or anything concrete in terms of floods or their prevention.

On July 2, when the same warning was issued again, the MEM emphasized Xi’s instructions on prevention work.

As for the floods, damage to the embankment facilities in sections of the Amur River in northeast China was only inadvertently revealed.

Last year, floods in various parts of China lasted from early June to late August. Xi finally appeared in Anhui Province when the floods receded. I believe he was ready to declare victory in the fight against floods.

However, the CCP Premier Li Keqiang went to Chongqing at the same time, walking through mud and inspecting rotten corn.

Propaganda for the victory against floods could only be halted.

Now it’s flood season again in China, but the CCP is merely covering up relevant information. The CCP’s high-level officials feigned ignorance, so naturally, as if there was no need to visit the disaster area.

As for the pandemic, the propaganda machine has downplayed its domestic severity. After tens of thousands of people gathered in Tiananmen Square for the July 1 celebration of the CCP centennial, another round of outbreaks can surely be expected.

Seeing that floods are coming on a larger scale throughout China, whether the army will be dispatched to fight the floods may be a true reflection of the pandemic.

The top leaders care for none of the disaster areas, and would not even bother to make a show. It’s obvious that the red country is never about the people.