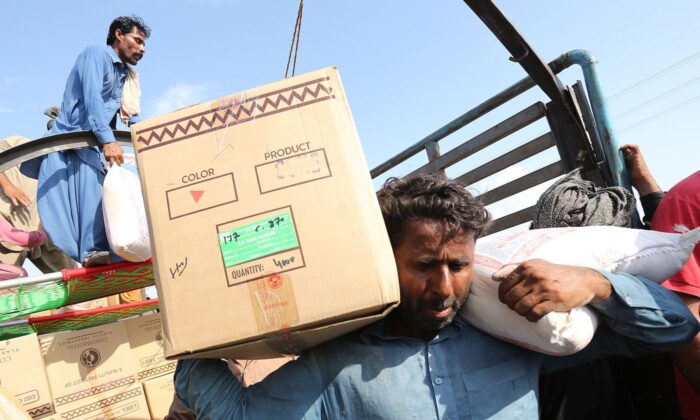 The International Monetary Fund (IMF) board on Monday approved the revival of a bailout loan program for Pakistan, whose economy has been worsened by monsoon floods.

The IMF’s approval will allow an immediate disbursement of $1.1 billion to Pakistan.

Finance Minister Miftah Ismail took to Twitter to express his gratitude for Prime Minister Shehbaz Sharif’s efforts to save Pakistan from default.

Alhamdolillah the IMF Board has approved the revival of our EFF program. We should now be getting the 7th & 8th tranche of $1.17 billion. I want to thank the Prime Minister @CMShehbaz for taking so many tough decisions and saving Pakistan from default. I congratulate the nation.

Pakistan entered the $6 billion loan program with the IMF in 2019, but the funding was stalled due to reform-related issues. With the latest disbursement, the IMF has disbursed $3.9 billion to Pakistan under the program.

IMF deputy managing director Antoinette Sayeh said that Pakistan’s economy was impacted by spillovers from the Ukraine war, domestic challenges, and “accommodative policies that resulted in uneven and unbalanced growth.”

Sayeh underlined the importance of Pakistan adhering to scheduled increases in fuel levies and energy tariffs to reduce unsustainable losses.

The IMF did not mention the flash floods in Pakistan, which claimed at least 1,136 lives and affected 33 million people. Floods were triggered by heavier-than-usual monsoon rains that began in June.

Foreign Minister Bilawal Bhutto-Zardari said the economic impact could exceed $4 billion due to the destruction of bridges and buildings. Floods also severed internet connections and electricity in Balochistan.

Bhutto-Zardari said the government will issue an appeal requesting that United Nations member states contribute to relief efforts, after which Pakistan would look into constructing “climate-change resilient” infrastructure.

Ahsan Iqbal, the Federal Minister for Planning Development and Special Initiatives, said on Monday that Pakistan’s “worst calamity” could have been avoided if the former government had allocated funds for flood prevention.

“However, not a single penny was spent during the last four years [on the National Flood Protection Program], resulting in the country facing the worst calamity,” Iqbal said in a statement.

Then-Prime Minister Imran Khan was ousted from power in April through a parliamentary vote. He had called for fresh elections and rallied thousands of his supporters to Islamabad.

Prime Minister Shehbaz Sharif said the current floods were comparable to the 2010 floods, which was the country’s worst flooding since 1929. More than 1,900 people were killed in that flood and 20 million others were affected.

Monsoon rains and flooding also occurred in 2011 and 2012, affecting millions of people across Pakistan, mainly in Sindh and Balochistan.

La Nina climate conditions contributed to the heavy monsoon rains in Pakistan this year and in 2010. La Nina refers to warmer-than-average sea surface temperatures in the western tropical Pacific ocean.