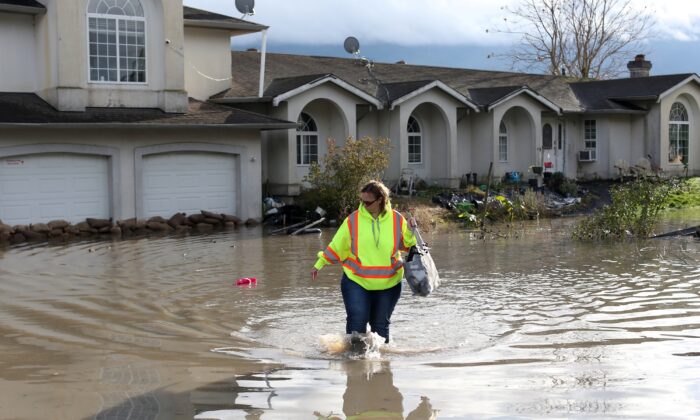 A resident of the Yarrow neighbourhood wades through floodwaters outside her home after rainstorms caused flooding and landslides in Chilliwack, British Columbia, Canada, on Nov. 20, 2021. (Jesse Winter/Reuters)
Canada

ABBOTSFORD, British Columbia—Searchers located three bodies swept away by landslides in British Columbia, officials said on Saturday, after record rainfall that paralyzed parts of the province, leading to food and fuel shortages.

Canada’s westernmost province declared a state of emergency after a phenomenon known as an “atmospheric river” brought a month’s worth of rain in two days. The rainfall washed out roads and railways, cutting off Vancouver and the lower mainland region from the rest of the country, and blocking access to some towns entirely.

Another similar weather system is forecast to hit northern British Columbia on Sunday and bring heavy rains to the lower mainland, according to Environment Canada.

Three more bodies were found, in addition to one located on Monday, and efforts to reach a fifth person caught in a mudslide have been unsuccessful, the province’s chief coroner said on Saturday.

“This has been an incredibly difficult year for all of us in B.C., and my heart goes out to the many families and communities who have suffered tragic losses,” Lisa Lapointe said in a statement.

The storms, which started last Sunday, forced the closure of the Trans Mountain pipeline and cut two critical east-west rail lines owned by Canadian Pacific Railway and Canadian National Railway Co that lead to Canada’s busiest port of Vancouver, impeding the supply of fuel and goods.

CP said work to repair damaged infrastructure would continue non-stop and service should be restored in the middle of next week.

About 14,000 people remain under evacuation orders in several communities in the Pacific province.