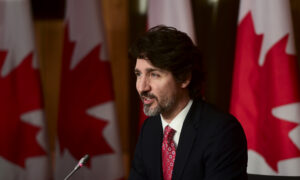 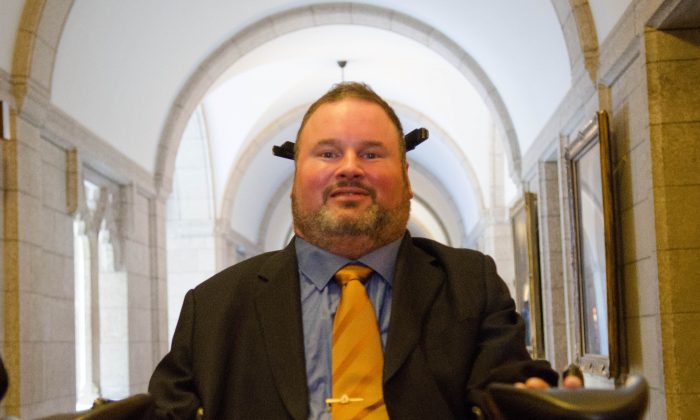 Speaking after question period on March 11, 2015, Conservative MP Steven Fletcher questioned the power of Canada's courts to overturn democratic laws. Fletcher praises a recent Supreme Court decision that did just that in regards to doctor-assisted suicide, but wonders about the long-term implications. (Matthew Little/Epoch Times)
Canada

Despite supporting a recent ruling on doctor-assisted suicide, MP thinks judges can go too far
By Matthew Little
biggersmaller
Print

PARLIAMENT HILL, OTTAWA—Conservative MP Steven Fletcher lauds a Supreme Court ruling that upends the law on doctor-assisted suicide, but he’s not sure the judges that fulfilled his wish should have had the power to do so.

They are unelected, says Fletcher, but able to overturn the laws made by democratically elected officials.

“There is the issue of the balance between the democratically elected people versus the unelected, unaccountable judges. There is a tension there,” he said.

Fletcher knows better than most, having added to that tension personally. He tried to end the prohibition on doctor-assisted suicide by introducing two private member’s bills in Parliament. No party would touch them.

While that democratic effort went nowhere, a Supreme Court ruling in February struck down the prohibition and now Parliament has to figure out how to deal with the court’s ruling.

“Obviously I was pleased with the court’s decision, though I wonder about the bigger picture of what that says about Parliament and its ability to set the course of Canadian priorities—or the course of Canadian history, really—if nine unaccountable, unelected people can overturn what was passed democratically,” he said.

Fletcher is not unaware of the problems electing judges could bring, including politicizing the judiciary, nor is he suggesting judges should be elected, but he said there is a tug-of-war happening and it is an important question.

“It’s judicial activism when judges ignore the law, or read into the law things that were never intended when Parliament passed the law.”

It is an interesting topic, he said, because it highlights the fact that reasonable people could look at the same issue differently, including the power of unelected judges.

In the end though, the laws will reflect the will of the people, he said, and protect minorities who might not be able to speak for themselves.

“It’s not mob rule, but it’s also not minority rule either,” said Fletcher, who was previously Minister of State for Democratic Reform.

In many cases, Parliament can change the laws that judges rule on, but that is much harder with Supreme Court rulings on constitutional issues.

But Fletcher said it’s not impossible to work around the Charter of Rights and Freedoms. All it takes is the notwithstanding clause. This clause can be added to legislation to exempt it from judicial review and the requirements of the Charter.

Fletcher acknowledges that many believe invoking the notwithstanding clause could be widely unpopular, but describes it as “an under-explored part of our constitution.”

Toronto Star columnist Chantal Hébert, whom Fletcher praised, recently floated the idea during a panel discussion on CBC that the Conservative government was intentionally tabling legislation that would get tossed out if taken to the Supreme Court. She said a list of overturned laws could give the Conservatives political cover to invoke the notwithstanding clause.

Fletcher was surprised and amused by the idea of such a ploy.

“Wow. The government is not that smart or diabolical, but I appreciate Chantal’s cynicism,” he said.

“We could never get it together to do something like that,” he joked. “No government could.”

“It goes with tinfoil hats and black helicopters.”

The headline of this article was edited for accuracy from a previously-published version.