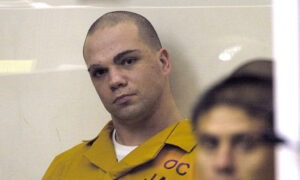 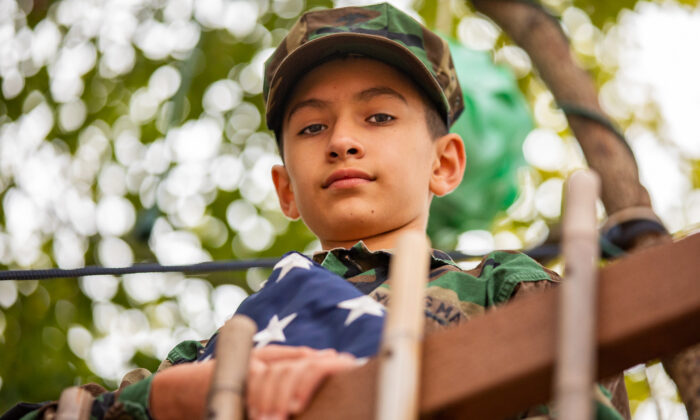 On any given Saturday morning, people living in Southern California might catch a glimpse of 11-year-old Jordan Ramirez taking his weekly stroll.

He isn’t difficult to spot. Ramirez dresses in military fatigues and carries a large “Thin Blue Line” American flag as he walks from police station to police station, often accompanied by an escort of squad cars.

“I want to show the first responders that I respect them,” Ramirez told The Epoch Times.

Since Sept. 26, Ramirez has visited 55 police, sheriff, highway patrol, and fire stations during his “Thank You for Your Service Walk,” covering nearly 120 total miles. At each stop, he presents officers with a plaque affirming his appreciation, and he says they’re grateful.

He said he wants to show them that they’re “not alone out there. You’re not the only ones out there doing good. And there’s more that support you as well.”

Ramirez—a La Puente resident with family serving in all four major branches of the U.S. military—is a member of the San Gabriel Valley Young Marines. On Jan. 15, he was promoted to the rank of Private First Class.

“Even though he hasn’t been with his unit for a while because of COVID, he’s earned his promotion,” Dimas Ramirez, Jordan’s father, told The Epoch Times.

“His unit commander told me that the Young Marines headquarters in Virginia [has] been getting a lot of calls regarding Jordan [because of] what he’s been up to.”

An Idea Is Born

The disruption to Jordan’s routine posed by COVID-19 inspired the boy to show his support for local law enforcement.

Before the pandemic, Jordan regularly participated in 5K races in his military uniform to honor his unit. When the races started getting canceled, he sought a way to continue showing his appreciation for the military and first responders.

“Back in early July, he was aware of what’s going on out there,” said Dimas, referring to the ongoing nationwide protests that occurred in the wake of George Floyd’s death on May 25.

Jordan began by visiting police and fire departments in the San Gabriel Valley. Since then, he and his father have ventured into Los Angeles County and Orange County, where Jordan has made stops at police departments in Fullerton, Anaheim, Garden Grove, La Habra, Brea, Placentia, Tustin, Irvine, and Newport Beach.

Dimas said Jordan plans to go even further, perhaps even to other states and major cities.

“There’s so much negativity out there that we need positive out there; you know, the people need it. And I guess this is a way for him to do it, and he enjoys it,” he said.

Jordan is no stranger to long distance walking and running: At age 10, he nabbed a world record for being the youngest person to run a marathon on all seven continents—a title he stole from his sister, who completed the same challenge at age 12.

“I wanted to break her record,” he said.

The endeavor—which took him to Australia, Egypt, London, Thailand, Antarctica, Chile, and Los Angeles—took about a year and a half to complete.

“It was very cold,” Jordan recalled of his marathon in Antarctica. “There was a lot of ice. It was the longest one I’ve done—around eight hours.”

By contrast, the boy faced 82 percent humidity at the marathon in Thailand, necessitating a midnight start time so the runners “don’t dehydrate even more than what they do already,” according to Dimas.

Jordan has also competed in 15 half-marathons, 30 10K runs, and around 175 5K races. Though he said he doesn’t have an exercise routine per se, he runs several times per week on a treadmill in his backyard.

In the second half of January, the youngster plans to visit Highway Patrol stations in West and South LA, the West Hollywood Sheriff’s Station, and police departments in Culver City, Beverly Hills, and Palos Verdes Estates.

Jordan, whose other hobbies include building Legos and drawing, said he wants to be a firefighter someday.