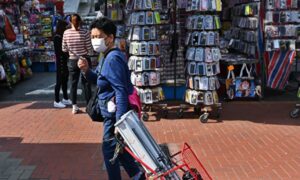 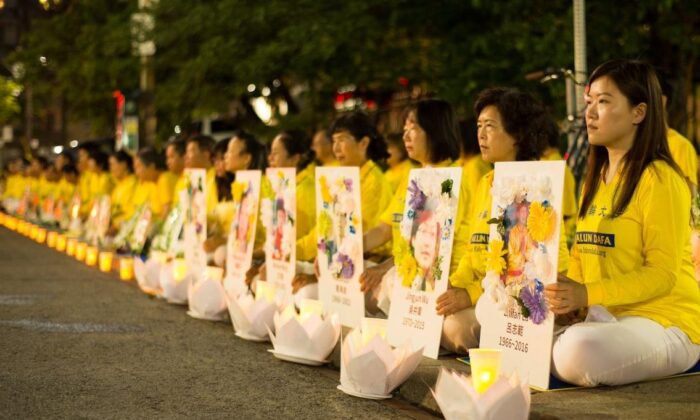 Falun Gong practitioners hold a candlelight vigil in front of the Chinese Consulate in Toronto on July 13, 2019, holding photos of fellow adherents who had died as a result of persecution in China. (Handout)
China Human Rights

In less than a month from March 14 to April 12, at least five mainland Chinese Falun Gong practitioners were directly persecuted to death in the Chinese Communist Party (CCP)’s prisons and other places of detention.

Falun Gong, also known as Falun Dafa, is a spiritual practice rooted in the Buddhist tradition that attracted 70–100 million adherents by the late 1990s. Practitioners come from all walks of life, from the central government to ordinary families.

Fearing its popularity, on July 20, 1999, then-Party leader Jiang Zemin launched a campaign to suppress Falun Gong. Since then, millions of people in China have been fired from their jobs, expelled from school, jailed, tortured, or killed for practicing Falun Gong, according to Falun Dafa Information Center.

Lu Guanru was a former employee of the Housing Construction Company of Daqing Petroleum Administrative Bureau and was in charge of housing construction cost planning. He started practicing Falun Gong in 1994 and was awarded as an advanced worker every year for his work.

On Nov. 9, 2018, police in the Daqing area of Heilongjiang Province arrested more than 60 Falun Gong practitioners, including Lu, and raided the homes of nearly 100 people, according to a report from Minghui.

Minghui is “a website dedicated to reporting on the Falun Gong community worldwide,” according to the introduction on its official website.

During the period when he was detained in Daqing Detention Center, Lu was forcibly fed, causing stomach bleeding, and was resuscitated in the hospital several times.

According to the Minghui report, Lu “was subjected to being tied up, freezing and standing torture.”

On April 4, he died of a hemorrhagic stroke in Tailai Prison in Daqing, Heilongjiang Province. He was 69 years old.

His family suspects that he may have been tortured to death.

On the night of April 12, Gong Piqi, is a 66 years old retired colonel and Falun Gong practitioner from Qingdao City, Shandong Province.

Gong began to practice Falun Gong on Aug. 15, 1999, after the persecution began.

When the leadership of his military unit came to know that Gong practiced Falun Gong, they forced him to retire early.

On the night of April 12, Gong’s family and friends were notified that he had died of a sudden cerebral hemorrhage. They rushed to the hospital the next morning, hoping to have a look at his body but were refused by the hospital and prison.

Prison surveillance video shows that Gong was not feeling well on the night of his death and had been lying in bed, during which a prison doctor came to take his blood pressure and then left without taking any measures. At around 8:32 p.m. that night, Gong fell to the ground.

Despite the strong protest of Gong’s family, only Gong’s elder brother and nephew were allowed to have a look at the body, but they were not allowed to take photos or videos.

“Mr. Gong’s head was injured and swollen and there was blood in his ears, according to his brother,” reported Minghui.

“Ms. Mao’s arm was broken and her face was bruised during the violent arrest,” Minghui report said.

On April 9, Mao was taken to the Chengdu Third People’s Hospital by the Chengdu City Detention Center for resuscitation. The detention center also notified her family to apply for urgent medical parole for her.

On the evening of April 11, Mao passed away in the Chengdu Third People’s Hospital. She was 57 years old.

At about 2:00 p.m. on March 26, Huang was sent home from the prison on an oxygen infusion.

“His entire body was black and blue. His family suspected that he had been given poison before being released,” reported Minghui.

Huang was arrested and his home was raided on April 17, 2019, because he used his cell phone to tell people about the persecution of Falun Gong. He was sentenced to seven years by the Yueqing Municipal Court.

In mid-November 2020, prison officials called and told his family that Huang was in the hospital for resuscitation. Doctors said Huang’s life was in danger. But the prison authorities refused to release Huang on medical parole. He was detained until his death.

Guo Baojun graduated from Zhengzhou Normal University. He was once a primary school teacher and later worked for Houzhai Township Hospital. He began to practice Falun Gong in 1995. People from local villages and his work units all said Guo was a kind person.

In November 2019, Guo was arrested when he was distributing Falun Gong materials in a local village. On June 29, 2020, he was sentenced to two years in prison.

For more than a year, his family was not allowed to see him. On Dec. 3, 2020, his son received a phone call from the Zhengzhou City No. 3 Detention Center, where he was detained, saying that Guo Baojun was in the hospital.

On that day, his son met Guo, who looked emaciated, according to his son. His eyelids were severely swollen and puffy. There was a gastric tube in his nose and a catheter in his lower body. His feet were locked by an index-finger-thick shackle.

Guo’s family had not been allowed to see him since his son’s visit.

On March 14, the detention center informed Guo Baojun’s family that Guo had died.

The United States Commission on International Religious Freedom (USCIRF) in its annual report in April stated that “thousands of Falun Gong practitioners were harassed and arrested during 2020 for practicing their faith, and some likely died due to abuse and torture while in custody. Credible international reports also suggested that organ harvesting, including from Falun Gong practitioners, likely continued.”

The U.S. State Department has announced sanctions on 17 foreign officials for significant violations of human rights. Huang Yuanxiong, police chief at the Wucun police station in Xiamen city, southern Fujian Province, was sanctioned for his involvement in the detention and interrogation of Falun Gong practitioners.

Lai Jianping, a former Beijing lawyer, told The Epoch Times that the CCP’s persecution of Falun Gong is illegal, “inhumane and utterly devoid of conscience.”