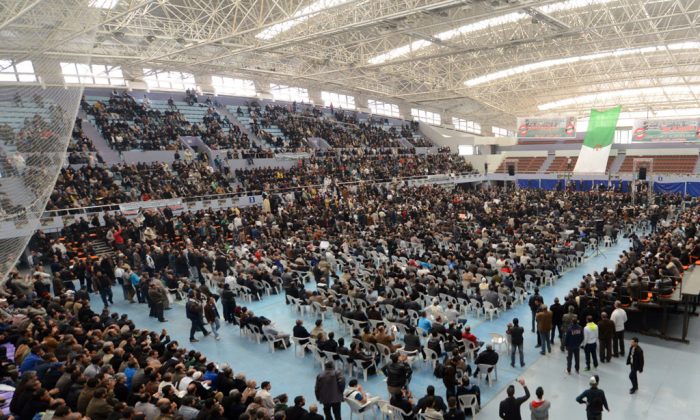 Algerians attend a gathering organized by political parties calling for the boycott of Algeria's April 17 presidential election, in the capital Algiers on March 21, 2014. There is growing anger and derision in Algeria over Bouteflika's intention to run due to his fragile health, with protests multiplying and many critics arguing that he is in no fit state to run the country. (Farouk Batiche/AFP/Getty Images)
Opinion

Five Arab Elections in Search of a Democratic Transition

In the current two months between mid-April and early June, five Arab countries—Algeria, Lebanon, Iraq, Egypt, and even war-torn Syria—are holding key elections, with little sign that any is moving in the direction of meaningful democratic transition.

On April 17, Algeria held presidential elections. The main candidate, three-term president Abdelaziz Bouteflika, was too ill to walk but apparently not too ill to run. He won with a sweeping 82 percent majority in a highly managed electoral contest. Algeria has avoided the eruptions of the Arab Spring partly because of the recent memory of civil war that Bouteflika helped end, the state’s large oil revenues, and the negative example of some Arab countries that had uprisings such as Libya and Syria. However, it suffers from high levels of unemployment, wide-scale youth discontent, and state repression. Government insiders claim that they are trying to engineer an internal transition by eventually naming a deputy to Bouteflika who will inherit power. This would not be a transition but a dynastic succession and a perpetuation of the rigid authoritarian system that has already collapsed in many Arab countries. Unless the Algerian regime takes seriously the need for evolution toward a more inclusive and interactive political system, Algeria might be marching toward eventual political disruption.

On April 23, the Lebanese parliament held its first of several attempts to elect a president for the republic. As of this date, three attempts have been made and have failed. The office of the presidency will fall vacant on May 25 with probably no elected successor to fill the post. Although the office of the president lost many of its executive powers after the constitutional changes of the Taif Agreement that ended the civil war in 1989-90, it is still a key institution that helps to maintain national unity and constitutional order. And although the Lebanese system provides a modicum of stability and a wide margin of freedom for its citizens, it is still deeply oligarchic and dysfunctional. In a sense Lebanon has been frozen in democratic transition for almost a century. It has long-standing democratic institutions, but it is a democracy that has deepened and perpetuated sectarian divisions. Reformers since the 1950s have been trying to push toward a less sectarian political system, and the Taif Agreement itself mandated the development and implementation of a national plan to move the country away from sectarianism. Yet 25 years later, the system is more sectarian than ever. Whether the sectarian oligarchs that dominate the Lebanese system will finally agree on a candidate to fill the presidential post or not, it is clear that the ruling elite in Lebanon has no intention of undertaking any serious political or socioeconomic reform.

On April 30, Iraq held parliamentary elections. Eleven years after the fall of the Saddam Hussein dictatorship and two and a half years after the withdrawal of American forces, Iraq is once again on the brink of disintegration. Instead of consolidating democracy, Prime Minister Nuri al-Maliki took advantage of the U.S. withdrawal and the large armed forces that the United States helped build to concentrate power in his own hands as prime minister, minister of defense, minister of interior, and commander of the armed forces. He also alienated Kurdish and Sunni partners in government. On the eve of the elections, the Kurds were openly considering secession, and Sunni discontent had opened the gates for a resurgence of al-Qa‘ida-related groups in Anbar and other Sunni parts of Iraq. Maliki remains the strongest among the Shi‘i candidates and is likely to receive the best results once they are announced. The key question is whether he will use this electoral victory to reinforce an authoritarian and exclusionary form of government or whether he will be forced to reach out to other groups—both within his own Shi‘i community and from the Kurdish and Sunni communities—to form a more inclusive government and lead Iraq back toward a more democratic future. Or will the Shi‘i community, with backing from Iran, put forward a more credible candidate and ease Maliki into retirement? If Maliki is not replaced or does not dramatically change his policies, these might be the last elections in a united Iraq.

Egypt faces presidential elections on May 26 and 27. Former Defense Minister Abdul-Fattah el-Sisi, widely popular for having removed former President Mohamed Morsi and his Muslim Brotherhood rule, is likely to win in a landslide. Indeed, many Egyptians clearly look to him to get them out of their many current predicaments. But Egypt today is on a contradictory course. The road map announced by the interim government and the new constitution ratified in January of this year speak of a rapid return to democracy, but the campaign against the Muslim Brotherhood has morphed into a return to authoritarian repression. Sisi says publicly that there can be no going back to the pre-2011 mode of government, but many within the various agencies of the Egyptian state and numerous members of the Mubarak-era oligarchy are likely betting that such a return is possible and is actively taking place. Unless Sisi as president can chart a course that can accommodate both security and citizenship and can put forward an inclusive political and economic vision for Egyptians that is different than what came before 2011, Egypt might eventually head back toward socioeconomic convulsions and political turmoil.

The most incongruous of the Arab elections are those announced for the killing fields of Syria for June 3. Bashar al-Assad, apparently not satisfied that under his rule Syria as we knew it has ceased to exist and that the national fabric that ensured centuries of coexistence has been torn asunder, does not even acknowledge the need for change. He will win unopposed in the areas the regime controls, but the election will only deepen national divisions and emphasize that the regime is not interested in any meaningful transition. How long will it take Syria to move out of its nightmare and find a path toward coexistence and building inclusive and sustainable national institutions? Hopefully this time will be measured in years rather than decades, but if the nearby examples of Lebanon and Iraq are anything to go by, the process will be long and painful.

Three years after the Arab uprisings brought hope to the Arab world, the scene today is very troubling. No parties or leaders have emerged to build on those popular uprisings and carry their message to power, and old parties or institutions have rushed to fill the void and negate much of the progressive momentum that those popular upheavals unleashed. But while the arc of social and political change might bend, it will not break. The demand of an awakened and empowered public for freedom, social justice, and accountable government can be temporarily thwarted and delayed, but it cannot be reversed. The current elections underline the fact that democracy means much more than elections, and that the road to democratic transition in the Arab world is still long and hard.