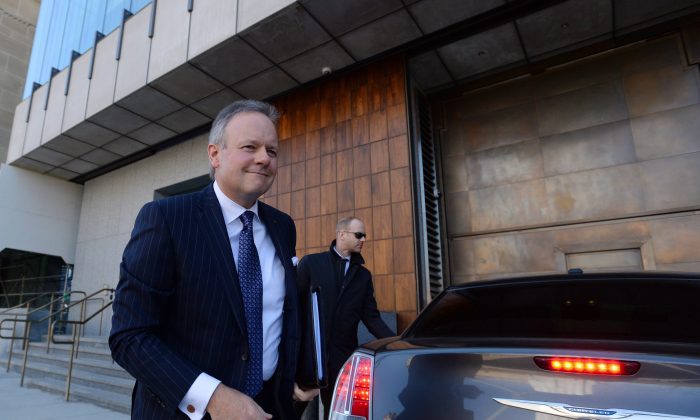 Bank of Canada governor Stephen Poloz arrives for his press conference in Ottawa on April 13, 2016. The central bank remains ready to act should the economic outlook deteriorate. (The Canadian Press/Sean Kilpatrick)
Business & Economy

Fiscal Spending to Lift Economy, According to Bank of Canada

Poloz: 'We've got a better mix of policies'
By Rahul Vaidyanath

OTTAWA—Fiscal spending in Budget 2016 will outweigh a number of economic headwinds and boost growth, according to the Bank of Canada. The Canadian central bank left its key policy rate at 0.50 percent, as widely expected on April 13.

“So far the reaction has been just fine. People take some reassurance that we’ve got a better mix of policies,” Poloz said. The credit rating agencies haven’t cringed at the spending and neither have financial markets.

In its interest rate decision, the BoC said the fiscal measures “will have a notable positive impact on GDP,” which is projected to be 0.5 and 0.6 percent in 2016 and 2017 respectively.

Fiscal expansion will be discussed at the G20 finance ministers and central bank governors meetings in Washington from April 14-16. The International Monetary Fund (IMF) and Organisation for Economic Co-operation and Development (OECD) have been advocating its use, if appropriate for a given country’s finances.

Canada has shown leadership in this regard with the federal budget as an example of a policy response to weak and uneven growth. Canada is in the strongest fiscal position among G7 members, having the lowest net debt-to-GDP ratio, to undertake fiscal spending.

We have the tools to take further action if the situation warrants it.
— Stephen Poloz, Governor, Bank of Canada

However, a Canadian senior finance official isn’t expecting any great consensus on the appropriateness of fiscal policy across the board. Other countries such as the U.K., U.S., and many European countries have less capacity and political willingness to take on the necessary debt.

So it’s certainly not the death knell for monetary policy. Poloz is not prepared to sit on the sidelines just because fiscal policy has the spotlight.

“If the outlook were to deteriorate then we would seriously contemplate moving interest rates lower,” Poloz confirmed.

“We have the tools to take further action if the situation warrants it.”

The BoC actually would have downgraded its outlook on the Canadian economy were it not for the government’s deficit spending.

Poloz acknowledged that this sounds contrary to popular belief given strong economic data recently such as March’s employment figure jumping by 40.6K and January’s GDP rising 0.6 percent. The BoC’s estimate of 2016 Q1 growth is an outsized 2.8 percent, but Q2 growth is projected to fall back to 1.0 percent as gains in household expenditures and exports tail off. It’s critical to look through the quarter-to-quarter variability.

Domestic growth for 2016 was revised higher to 1.7 percent from 1.4 percent in April’s Monetary Policy Report (MPR). For 2017, growth is roughly unchanged from January at 2.3 percent.

One of a few reasons for the bank’s caution is a deeper cut to the amount of capital spending by oil and gas firms. The bank expects it to fall to 60 percent below its 2014 level.

In Canada’s biggest export market, growth is projected to be lower than it was in January. Shifts taking place in U.S. housing construction and energy sector investment mean less demand for exports of Canadian manufactured products.

The skyrocketing loonie—up 13 percent since the January MPR—is also expected to slow the growth trajectory for these non-resource exports. Poloz says most of what’s responsible for the loonie’s rise is recent changes in expectations about monetary policy in Canada and the U.S. Rate hikes look increasingly gradual in the U.S., while rate cuts seem less likely in Canada.

Thus fiscal policy appears to be winning the battle against a number of foes so that Canada is seeing a better economic growth profile.

The BoC downgraded potential output to 1.5 percent from 1.8 percent, given the fall in the price of oil and other commodities. It recalculates its estimate of potential output annually in April.

With the upward revisions to GDP, thanks to Budget 2016, the economy is projected to operate at full capacity in the second half of 2017. However, full capacity is estimated to be at a lower level.

The BoC cautions there is a great deal of uncertainty about potential output and the closing of the output gap. “It is particularly difficult to measure capacity when an economy is undergoing a structural adjustment, as Canada’s is,” Poloz said.

The consensus among Bay Street economists is that the BoC is on hold with rates until 2017.

“We don’t see the Bank raising rates until Q4 next year,” said CIBC chief economist Avery Shenfeld, given how long it is expected to take to close the output gap.

“We continue to believe the BoC is on hold for the next year with rate hikes only coming into view in the second half of 2017,” said Douglas Porter, BMO’s chief economist.

The bank’s next interest rate decision is May 25. The next set of economic projections will be published July 13.