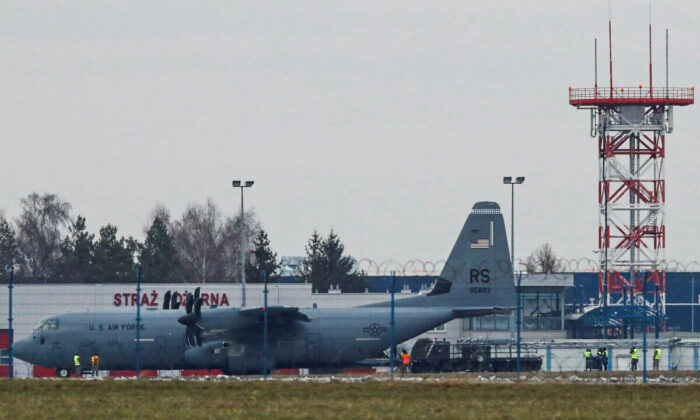 The first U.S. troops reinforcing NATO allies in Eastern Europe amid Russia–Ukraine tensions arrived at a military base in southeastern Poland on Saturday.

Lipczynski said the arrivals included some support and command-level staff, adding that a much larger contingent is expected to arrive at the airfield on Sunday. The second transport was initially slated for arrival on Saturday afternoon, but those plans were changed for undisclosed reasons, Lipczynski added.

“We await the arrival of our allies,” Lipczynski told PAP, adding that “our collaboration has been going very smoothly.”

In total, some 1,700 U.S. soldiers from the 82nd Airborne Division based at Fort Bragg, North Carolina, are expected to be stationed in Poland, the spokesman said, describing it as an elite rapid response force that Polish troops have worked with on multiple occasions.

“We served alongside them on missions, including Iraq and Afghanistan,” Lipczynski said, adding that the soldiers had also trained together during international war games like Dragon and Anaconda.

“We can count on each other, and trust one another,” he added.

The U.S. troop contingent arrived on the same day that the Russian Defense Ministry announced it had sent a pair of long-range nuclear-capable bombers on patrol over Moscow ally Belarus, which shares a border with Poland.

“In the course of their flight, the long-range aircraft practiced joint tasks with the air force and air defense of the Belarusian armed forces,” the ministry said, according to Russian state news agency TASS. The patrol mission lasted around four hours, after which the Russian planes returned to base in Russia.

The patrol mission came as the Kremlin has moved troops from Siberia and other remote parts of Russia to Belarus for sweeping joint drills, with the deployment adding to a large Russian military buildup near Ukraine that has fueled Western fears of a possible invasion.

Russia has denied any plans of attacking Ukraine and has asked the United States and its allies for a binding commitment that they won’t accept Ukraine into NATO.

Ukraine’s president Volodymyr Zelensky has pushed for his country’s admission into the military alliance.

The Kremlin has also asked the United States and its allies to promise not to deploy offensive weapons and to roll back NATO deployments to Eastern Europe.

French President Emmanuel Macron and German Chancellor Olaf Scholz are set to make separate trips on Feb. 7–8 and Feb. 14–15 to Kyiv and Moscow as part of a high-level diplomatic effort to defuse tensions.