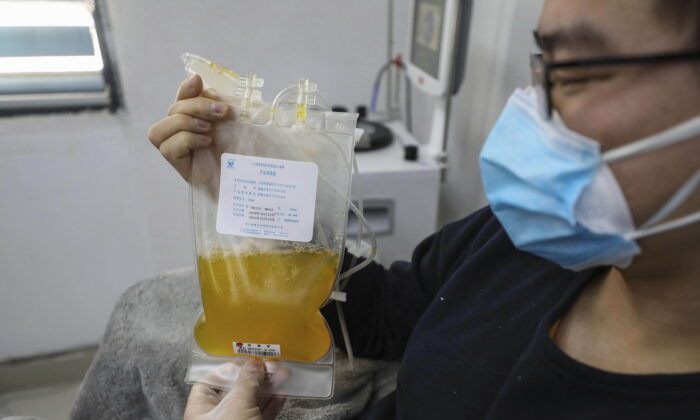 First US Patient Gets Experimental Treatment for CCP Virus

The first COVID-19 patient in the United States received a transfusion from a recovered patient, a hospital in Texas announced.

Convalescent plasma, one of four components of human blood, is collected from patients who were infected with COVID-19 but later recovered and given to critically ill patients.

The experimental treatment has been touted by some of the top health officials in the country as researchers race to find a proven treatment for the new disease, which is caused by the CCP (Communist Chinese Party) virus, commonly known as the novel coronavirus.

Houston Methodist announced this week that it was the first hospital in the nation to treat a patient in the United States with the experimental method, following the Food and Drug Administration’s (FDA) announcing approval to test the therapy.

Plasma from recovered patients may have antibodies against the CCP virus that could potentially help patients recover, according to Dr. Eric Salazar, a physician scientist with Houston Methodist’s Research Institute. Salazar and his team recruited blood plasma donors who have been in good health for more than two weeks since being diagnosed with COVID-19. Each donor gave a quart of blood plasma. Medical workers transfused the plasma into the two critically ill patients.

The concept dates back to the Spanish flu pandemic of 1918 and has been tested more recently during the Ebola and SARS outbreaks. Chinese researchers used the experimental therapy on five patients. Preliminary findings indicated positive results but researchers stressed evaluation in clinical trials is needed.

Salazar said using treatments now is crucial as the number of cases continues to rise in the United States.

“Convalescent serum therapy could be a vital treatment route, because unfortunately there is relatively little to offer many patients except supportive care, and the ongoing clinical trials are going to take a while. We don’t have that much time,” he said in a statement.

Physician-scientists at Houston Methodist are seeking approval from the FDA for follow-up experimental studies and hope to launch a multicenter trial across the nation looking at the therapy.

President Donald Trump told reporters on Monday that early results from the treatment are “promising.”

“While much of the research has to be done—we have a lot of research left to do, obviously—this treatment on plasma has shown promising results in other countries,” he said.

Researchers are also looking at existing drugs, including hydroxychloroquine and Kevzara, as possible treatments for COVID-19. Doctors across the nation are prescribing the former, a malaria drug, along with other drugs to try to treat patients.