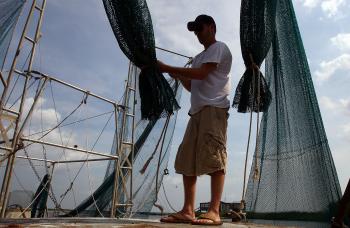 DULARGE, LA - Daniel May sets up his nets on a shrimping barge located in a bayou on August 16. Today marks the beginning of the shrimping season for white shrimp in Louisiana, the first since the Deepwater Horizon. (Win McNamee/Getty Images)
US

Madeline Liu
View profile
Follow
biggersmaller
Print
Shrimp season began in the waters off the coast of Louisiana on Monday. Although officials report that much of the seafood caught in the area is safe for consumption, shrimpers remain concerned that their business will be hurt by oil lingering in the Gulf of Mexico.

On Aug. 14 the FDA explained that although “crude oil has the potential to taint seafood with flavors and odors caused by exposure to hydrocarbon chemicals, the public should not be concerned about the safety of seafood in stores at this time. Fish and shellfish harvested from areas unaffected by the closures are considered safe to eat.”

The NOAA previously closed a large area of the Gulf to commercial fishing, as well as some state molluscan shellfish beds in anticipation of the oil nearing the shoreline. They report that they will continue to monitor area waters and prevent unsafe seafood from reaching the market.

Officials say that if adulterated seafood is found on the market, both the FDA and affected states will use their authority to remove it from the food supply.

Despite these reassurances, area fishermen worry that prices for their catch will be minimal as many consumers are suspicious that shrimp from the region may still be contaminated from the massive BP oil spill.

Meanwhile, the FDA has implemented a surveillance sampling program of seafood products at Gulf Coast area primary processing plants. They explain that while oysters, crabs as well as shrimp could retain contaminants longer than finfish, their sampling will provide verification that seafood being harvested is safe to eat.