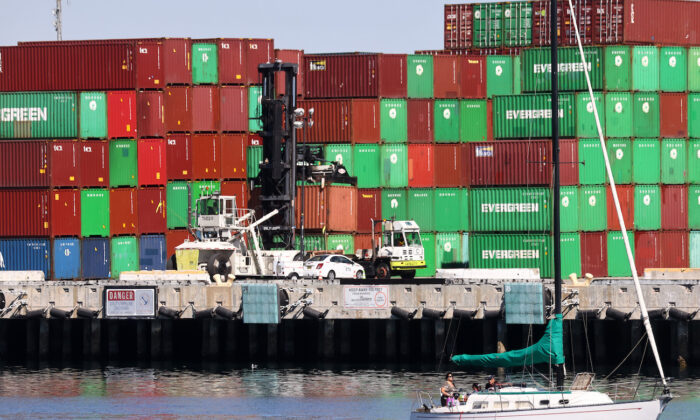 Clearance of backed up containers cut GDP by 3.2 percentage points
By J.G. Collins

This morning’s print of 2022 first quarter GDP (2022Q1)  largely disappointed observers, including us, who had anticipated a higher print. (We had anticipated a print of 1 to 1.5 percent  in our jobs report at the beginning of the month.)

PCE, the traditional driver of GDP, dropped considerably from the comparable quarter last year, but was up slightly from last quarter.

The category of net exports (exports less imports) printed deeply negative at -3.2 percent, caused largely by the clearing of the backlog of container ships that had built up at the end of 2021 and also petroleum imports, which increased by 8 million barrels in January over the same period last year. (February and March data will not be available until later.) Exports also dropped by more than half a percentage point.

We think that the Federal Reserve Open Market Commission will likely see the import anomaly and continue the widely anticipated half percentage point increase.

Economic optimism rose in early April, according to polling by IBD/TIPP.
Data maintained by the Census Bureau is largely mixed, but with some troubling elements. Residential construction has slowed and inventories have increased.
Personal consumption expenditures decreased in February in constant dollars.
Margin debt has decreased as the market reduces risk in the face of virtually inevitable Federal Reserve rate hikes.

Russia’s Gazprom has closed off natural gas sales to Poland and Bulgaria after demanding payment in rubles to avoid Western sanctions on the Russian currency. The European Union (EU) gets about 30 percent of its oil and 40 percent of its natural gas from Russia (Poland gets 45 percent), so fuel prices and inflation in Europe are rising. The EU says it has prepared for the situation and is working to maintain the best possible situation, with other EU countries assisting Bulgaria and Poland with their supplies. Nevertheless, Eurozone inflation is almost certain to get worse.

As of April 25, the United States Navy has two carrier strike groups (CSG), led by the USS Abraham Lincoln and USS Ronald Reagan, along with an amphibious response group, deployed in the far Western Pacific, which will likely deter China from taking advantage of the focus in Ukraine. The USS Harry S. Truman CSG is in the Adriatic.

The Tigray War in resource-rich Ethiopia continues unabated and largely unreported, as it has since 2020, with over 50,000 now dead. Some speculate that Ethiopia’s unexploited natural gas supplies rival those found in the Middle East.

The ruble has largely recovered from what is now the apparently failed U.S.-led effort to undermine the Bank of Russia, the Russian central bank. The USD:RUB pair, at 1:73 is roughly what it was in February, after soaring past 100 in February and March.

The USD:JPY has moved past 1:130 for the first time in 30 years. The Bank of Japan has said that it will keep the yield at 0.25; meanwhile, in a seemingly contradictory move, the Ministry of Finance says it will defend the yen. Currency vigilantes are likely circling to take advantage.

The next meeting of the European Central Bank (ECB) monetary council is June 9. It’s unclear whether it will raise rates; we expect it will, by at least a quarter-point.

Likewise, the Bank of England will likely raise rates beyond their current 0.075 percent as inflation in the U.K. is running at 7 percent.

We are clearly in what I call “bear market stagflation“. The Dow Jones Industrial index has fallen 8.5 percent since the beginning of the year, which likely affected the drop in consumer spending in the first quarter.

The first quarter’s negative print of NEX  is likely an anomaly and the highest increase since 2020Q3, at the height of the pandemic. (In the four prior quarters, NEX averaged just -0.81 percent. Pre-pandemic, for 2019, quarterly NEX averaged just + 0.35 percent. ) NEX is also the element of GDP most prone to large revisions in later estimates.

Consequently, we think the Fed will boost rates by the half percentage point that most anticipate.

We think the second quarter GDP will print more positively, in the range of 0.5 percent to 1.5 percent. We’ll be able to target that somewhat more precisely when we revise it after the April jobs report prints May 6, coterminous with the end of the Fed meeting.

DISCLOSURE: The views expressed, including the outcome of future events, are the opinions of The Stuyvesant Square Consultancy and its management only as of April 28, 2022, and will not be revised. Statements herein do not represent, and should not be considered to be, investment advice. You should not use this article for that purpose. This article includes forward-looking statements as to future events that may or may not develop as the writer opines. Before making any investment decision you should consult your own investment, business, legal, tax, and financial advisers. We associate with principals of TechnoMetrica on survey work in some elements of our business.