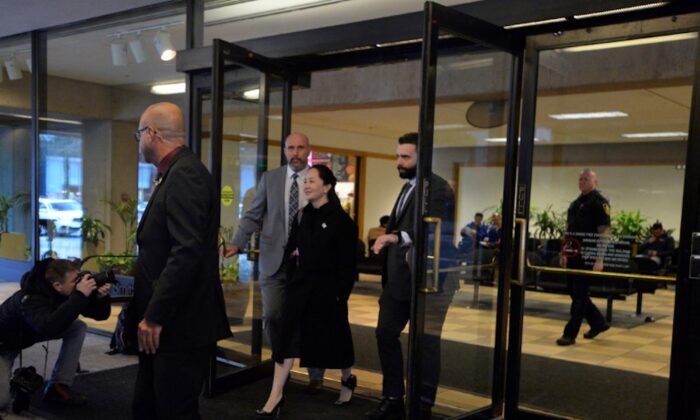 VANCOUVER—Lawyers for Huawei Chief Financial Officer Meng Wanzhou will respond on Jan. 23 to the Canadian prosecutor’s arguments calling for Meng to be extradited to the United States on bank fraud charges.

Thursday’s proceedings will wrap up the first phase of the extradition process and legal experts have said it could be years before a final decision is reached in the case, since Canada’s justice system allows many decisions to be appealed.

On Wednesday, prosecutors argued that Meng should be extradited on fraud charges, and that contrary to her defense argument, the case is not solely about violation of the U.S. sanctions against Iran.

“Fraud, not sanctions violations is at the heart of this case,” prosecutor Robert Frater told the judge on Wednesday.

Meng, 47, has said she is innocent and is fighting extradition.

The United States has charged Meng with bank fraud, and accused her of misleading HSBC Holdings Plc about Huawei Technologies Co. Ltd.’s business in Iran.

But Meng’s legal team argued that “double criminality,” is the central issue in this case. Under Canadian extradition laws, a person can only be extradited if the offense they are alleged to have committed in another country is also considered illegal in Canada. This is commonly called “double criminality.”

Unlike the United States, Canada did not have sanctions against Iran at the time Canadian officials authorized the start of the extradition process, her lawyers have said.

“In reality, sanctions violation is the essence of the alleged misconduct … the United States has a global interest in enforcing its Iran sanctions. Sanctions drive this case,” Richard Peck, one of Meng’s lawyers added.

Frater argued on Wednesday that the judge’s job was to “ensure that Canada doesn’t become a safe haven for fraudsters.”

He also said it is not the judge’s role to determine whether Meng is guilty of fraud, but whether the alleged behavior could also be prosecuted as fraud in Canada.

Court proceedings show the United States issued the arrest warrant, which Canada acted on in December 2018, because it believes Meng covered up attempts by Huawei-linked companies to sell equipment to Iran, breaking U.S. sanctions against the country.

Meng’s court proceedings have attracted global media interest and the case has strained relationship between China and Canada.

Meng, the daughter of Huawei’s billionaire founder Ren Zhengfei, remains free on bail in Canada, and has been living in a mansion in Vancouver’s exclusive Shaughnessy neighborhood.

Meng’s legal team is currently only scheduled to call evidence in the last week of April, and a second phase of the trial, focusing on abuse of process and whether Canadian officials followed the law while arresting Meng, is set to begin in June. Closing arguments are expected in the last week of September and first week of October.