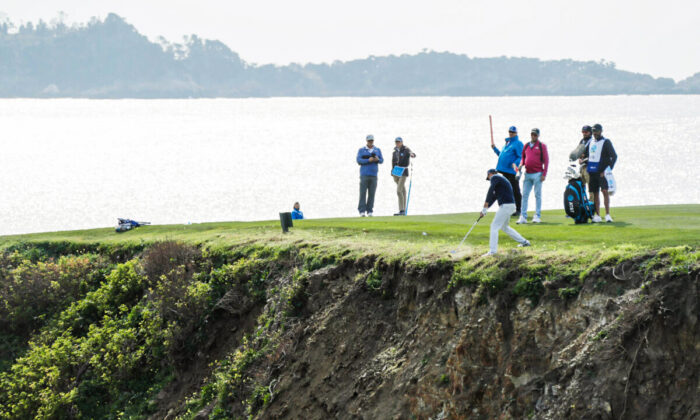 Jordan Spieth of the United States plays his second shot on the eighth hole during the third round of the AT&T Pebble Beach Pro-Am at Pebble Beach Golf Links, in Pebble Beach, Calif., on Feb. 5, 2022. (Kent Horner/Getty Images for AT&T)
Golf

With 203 career starts, Tom Hoge rallied with four birdies on the back-nine Sunday to win his first PGA Tour at iconic Pebble Beach in the AT&T Pebble Beach Pro-Am, recovering from a double-bogey at the #5 par-three.

Hoge, 32, currently resides in Dallas with his wife Kelly and is only the third tour winner from North Dakota.

The last first-time winner at Pebble Beach was D.A. Points in 2011, which is the year Hoge turned professional.

Hoge had missed two cuts in his previous three starts at the Sony Open in mid-January, and the previous week at Torrey Pines; he finished solo second at La Quinta’s American Express two weeks ago.

“I guess just all the times I’ve been here and failed in the past have gotten me ready for this moment,” said Hoge. “Being there a couple weeks ago was certainly nice getting comfortable in the situation.”

The victory purse of $1.566 million propels Hoge to second on the money list early in the season with over $3 million in earnings, and takes him to a ranking of 17th in the world on the PGA.

Hoge began the tournament leading after a low round of 63, and stayed at the top of the leaderboard with scores of 69, 68, and a final round of 68 to finish (-19) two strokes ahead of Jordan Spieth.

Hoge was behind two strokes and even after taking the lead felt that he had to keep “pushing.” Hoge said, “With Jordan Spieth in front of you, you know that he’s going to do something incredible like he always does.”

Statistically, Hoge hit 69.1 percent of fairways, averaging 295.8 yards on his drives with his longest drive of 355 yards, hit 77.8 percent greens in regulation, and made an average of 1.6 putts.

The 28-year-old Spieth, former No. 1 in the world, won the event in 2017 and went on to win the last of his three majors at the British Open that year.

The second-place finish places him at #12 in the World Rankings, as Spieth hopes to return to form after several years of dealing with injuries, getting married to his wife Annie in 2018, and the birth of their son Sammy.

Saturday’s magical round of 63 placed Spieth in contention, which included the “cliff shot” that is now famous on the #8 hole.

Spieth drove the ball right past the hazard marker, ending up a couple of feet from the edge of a 68-foot cliff drop overseeing the Pacific Ocean. His caddy urged him several times to take a penalty and drop the ball out of the hazard.

Spieth refused, instructing his caddy not to step past the hazard marker, hitting the approach shot just past the green, and was able to save par.

Spieth said looking back at the video footage that it was “downright terrifying.” He was unable to follow through normally as the weight shift would put him over the slope into the cliff.

Annie reacted, “It’s just golf. You don’t have to do that,” said Spieth. He added that she and his family were “relieved” and asked for details.

Spieth shot a final round 69 for a total of 17-under with five birdies and two bogeys. He took a two-stroke lead following birdies on #12 and #13.

Spieth felt that he had to continue to make birdies as Hoge was “on his heels,” and Patrick Cantlay was still in contention.

The difference in the tournament was Spieth choosing the wrong shot-shape approaching par three, hole #17, which lead to a bogey, giving up the lead.

Spieth hit what he thought was his best shot of the day, but the wind forced the shot into the bunker, and the putt for par was too fast to break into the hole. Besides his nerves impacting his driver swing late in the round, he was overall very satisfied with his ball-striking.

“I still feel like there’s some significant progression to get it to where I want it to go,” said Spieth. In practice sessions, “those are striped, and every ball is on a string; transferring it to the course just keeps getting better and better.”

Regarding Pebble Beach, “I mean I could stay here for months and just play this golf course,” added Spieth. “All three [courses] were so much fun this week. They’re in such great condition. It’s one of our favorite places in the world here on the Monterey Peninsula.”

Leaderboard notables include Beau Hossler finishing third with a final round 70 for 16-under; Cantlay and Troy Merritt tied for fourth.

The PGA next heads to the WM Phoenix Open in Scottsdale, Arizona, from Feb. 10 to 13.