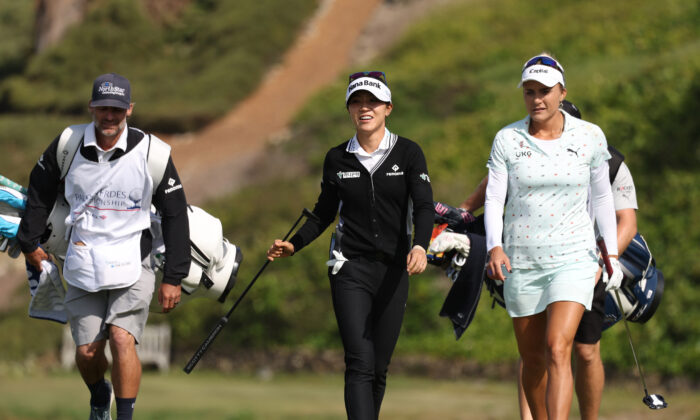 Lydia Ko of New Zealand and Lexi Thompson smiles as they walk to the 11th green during the first round of the Palos Verdes Championship Presented by Bank of America at Palos Verdes Golf Club, in Palos Verdes Estates, Calif., on April 28, 2022. (Harry How/Getty Images)
Golf

First LPGA Event at the Hidden Jewel of Palos Verdes

At a hidden gem of a golf course along the southern coast of Los Angeles County, the first edition of the Palos Verdes Championship is played. In a field full of top players in the world, Australia’s Minjee Lee takes the first round lead with a bogey-free round of 63, shooting 8-under, tying her career-low round on the LPGA Tour.

“The first nine we didn’t have that much wind so it was nice just to play without the wind, then the back nine it picked up a little bit,” said Lee.

“The front nine we have a lot of wedges into the holes so I took advantage of that,” added Lee. “I feel like throughout the first half of the season, I’ve been hitting it pretty solid so I know my game is there. I just need to put it all together. Hopefully, I can take my good round today into the next three days.”

In her first competition at Palos Verdes, Lee was pleasantly surprised to see kikuyu grass, stating, “My golf club back home, it’s the same type of fairways,” said Lee. “I don’t think we play a course with the same type of grass throughout the whole year so it was kind of a nice surprise when I got here.”

One stroke behind is world No. 1 Jin Young Ko of Korea, making six straight birdies in the opening nine holes from holes 2–7 eventually shooting 7–under.

Ko returns from being in contention last week at the LA Open at Wilshire Country Club, following an opening low round score of 64.

But a quadruple bogey approaching the seventeenth green landing in a “ditch” just left of the green resulted in a finish tied for 21st.

Three players are tied for third at –6, including Charley Hull of the UK, Moriya Jutanugarn of Thailand, and top American on the leaderboard Jennifer Chang,

Since qualifying for the tour in 2020, Chang has struggled and missed three of four starts this year. The 22-year-old Chang played her college golf on the other side of Los Angeles at USC.

“It’s a home course. We’ve always had a tournament every year,” said Chang. “I think having experience out here does help. The contours of these greens, there are a lot of severe slopes that you don’t see.”

Chang was bogey-free, making six birdies including four straight on holes 4–7, and had only 25 putts.

“I put myself in a good position on the green and converted all the putts,” added Chang. “Just having experience putting off this green, just being familiar with it, is a pretty big advantage.”

“I’m just going to keep my head down. Obviously, there is still a lot of golf left. Just keeping the same routine that I’ve had and hoping it pays off,” concluded Chang.

Former Stanford standout Albane Valenzuela from Switzerland and Gemma Dryburgh of Scotland are tied for sixth at 5-under.

Rounding out the top ten are five players with a score of –4, including Megan Khang of Massachusetts, Ruixin Liu of China, two rookies Ayaka Furue and Pauline Roussin Bouchard, and major champion Hannah Green, who just finished second last week.