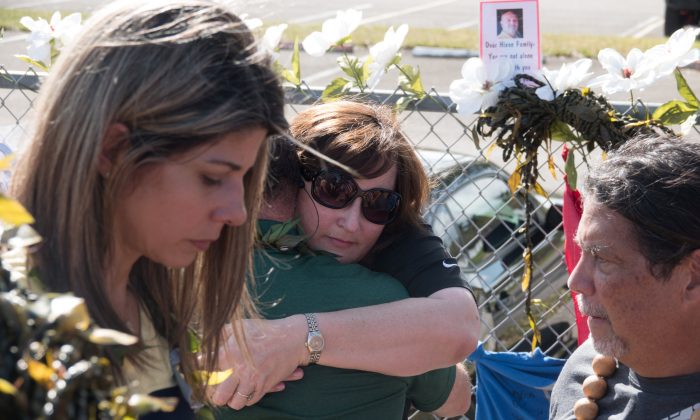 Parkland Mayor Christine Hunschofsky receives a hug as she and other government officials mourn, as students and parents arrive for voluntary campus orientation at the Marjory Stoneman Douglas High School, Feb. 25, 2018. (Reuters/Angel Valentin)
US News

FORT LAUDERDALE, Florida—The parents of a 17-year-old student who was shot five times as he shielded others during the Parkland, Florida high school mass shooting on Tuesday filed the first lawsuit on behalf of a victim in the massacre that killed 17 people and wounded 17 others.

The suit seeks a jury trial and an unspecified amount of damages from seven defendants, including Nikolas Cruz, 19, the accused killer in the Feb. 14 shooting rampage at Marjory Stoneman Douglas High School in Parkland, Fla.

Other defendants are the estate of Cruz’s late mother, a Parkland couple who housed Cruz in the time immediately before the massacre and three mental health centers that evaluated and treated Cruz.

The suit filed in Broward County Circuit Court charges Cruz with assault and battery and the other six defendants with negligence. Broward is the county where the shootings occurred.

The plaintiffs are the parents of Anthony Borges, who was hospitalized for more than a month after being shot three times in his legs and twice in his torso, the suit says. It also says Borges is confined to a wheelchair for the foreseeable future and requires constant care.

In the criminal case against Cruz that has 17 first-degree murder counts and 17 attempted murder counts, a Broward Circuit judge has yet to determine if he has enough funds to pay for his own defense.