Hollywood actor Peter Fonda got the attention of the Secret Service after he publicly called for the kidnapping of the first lady’s 12-year-old son, Barron Trump.

Fonda called for Barron to be “ripped” from Melania Trump’s arms and put in a cage “with pedophiles.” Stephanie Grisham, spokesperson for the first lady, told The Daily Caller that the Secret Service has been notified of the threat.

In the past few days, the 78-year-old actor also unleashed a series of disturbing tweets targeting both Secretary of Homeland Security Kirstjen Nielsen and White House press secretary Sarah Sanders. The tweets have since been deleted.

Fonda called for the public caging and rape of Nielsen in a June 19 tweet, saying that she “is a lying gash that should be put in a cage and poked at by passersby.” He continued, “The gash should be pilloried in Lafayette Square naked and whipped by passersby while being filmed for posterity.”

Donald Trump Jr., the older brother of Barron, slammed the actor on social media and called on Sony Pictures to take action. Fonda stars in the studio’s upcoming film “Boundaries.”

“You’re clearly a sick individual and everyone is an internet badass but rather than attack an 11-year-old like a bully and a coward why don’t you pick on someone a bit bigger,” Trump Jr. wrote on Twitter in response to Fonda.

Fonda’s tirade didn’t stop there. On June 20, he called on people to target the children of Border Patrol agents, tweeting that “we should find out what schools their children go to” and “scare the [expletive] out of them.”

Fonda is the latest in a string of celebrities to issue violent threats against the president and his family. Comedian Kathy Griffin faced backlash last year after she posted a photo with a mock severed head resembling that of President Donald Trump. 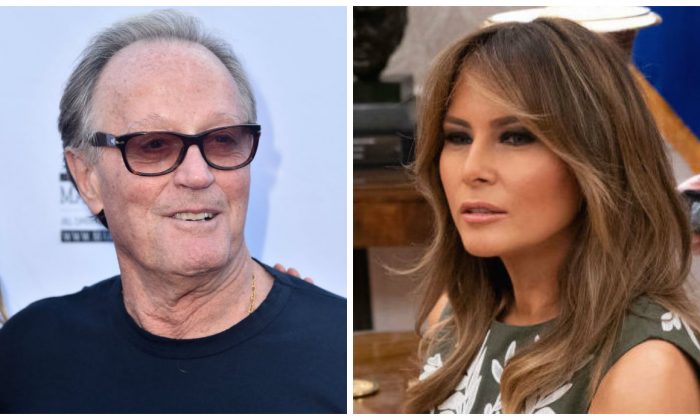