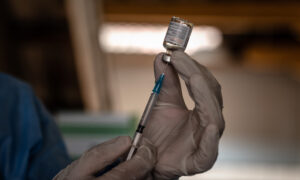 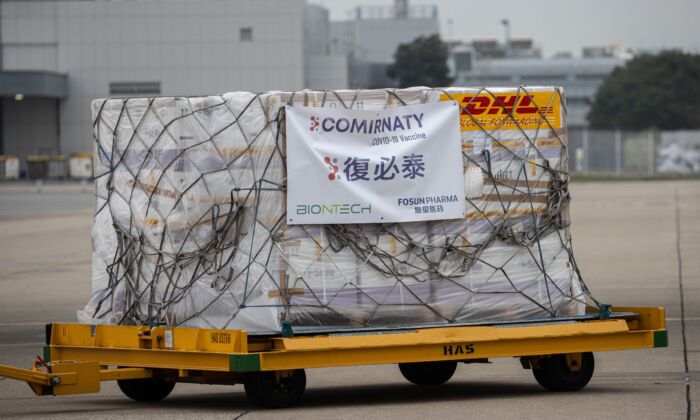 A trolley carrying Pfizer-BioNTech COVID-19 coronavirus vaccines is transported to a warehouse after being unloaded from a Cathay Pacific cargo plane at Hong Kong International Airport in Hong Kong on Feb. 27, 2021. (Jerome Favre/POOL/AFP via Getty Images)
Chinese Regime

The first batch of German-made Pfizer-BioNTech COVID-19 vaccine arrived in mainland China on April 13 and was made available to Chinese people for vaccination with a fee.

This is the first time that the Chinese regime allowed Chinese people to receive an imported COVID-19 vaccine.

The importer, Fosun Pharma from Shanghai China, ordered 100 million doses of the effective German-made COVID-19 vaccine for the mainland in December 2020. It’s unclear how many doses are available in this first batch.

The Chinese regime has approved five locally made vaccines for emergency use, and vaccinated people without charging a fee. At the same time, the regime ambitiously exports the vaccines to developing countries with its vaccine diplomacy agenda, such as forcing Taiwan’s allies to break away from supporting the island nation in exchange for vaccines.

Fosun Pharma always uses the name Comirnaty vaccine for the Pfizer-BioNTech COVID-19 vaccine, and claims that it’s a BioNTech vaccine that was made in Germany, without mentioning Pfizer. Pfizer is an American company.

As the sole sales agent of the Pfizer-BioNTech vaccine in the Greater China region, Fosun Pharma supplied and vaccinated people in Hong Kong and Macao.

For the mainland market, Fosun Pharma announced it had ordered no less than 100 million doses of Germany-made vaccines with a total contract value of 500 million euro ($600 million)—with a unit price of 5 euro ($6)—on Dec. 17, 2020.

Hui Aimin, president of Fosun Pharma, said at China’s 2021 National Vaccine and Health Conference in Chengdu on April 10 that the effectiveness of Pfizer-BioNTech vaccines is 100 percent on children younger than 15-years-old; 95 percent on people between 15-years-old and 65-years-old; and 94 percent on the people older than 65-years-old.

The efficacies of China-made vaccines were reported to be 50.4 percent in Brazil, and 33.3 percent and 11.5 percent in Peru for the Wuhan-made and Beijing-made vaccine respectively—figures that have been denied by the ruling communist party.

Vaccination in the Mainland

Chinese people, including officials and doctors, have been reluctant to receive China-made COVID-19 vaccines since day one, with the concerns of the vaccines’ safety.

At the same time, the adverse reactions are a state secret, and the regime censors any related topics. Furthermore, the authorities don’t announce the vaccination rate as other countries do. State-run media Xinhua reported on April 9 that less than 10 percent of Chinese people had been vaccinated by April 7.

On April 13, Fosun Pharma didn’t announce publicly the arrival of the Pfizer-BioNTech vaccine. The related reports on China’s media and posts on social media platforms were removed by censors hours after they were posted.

From the saved web pages, Chinese people learned about the arrival of the first batch of the BioNTech vaccine.

“We, ordinary people, want to save our lives. We’d like to choose the safest and most effective vaccine. Cost is the second priority,” Wu from Wuhan told Radio Free Asia on April 14. He said he would like to receive the Pfizer-BioNTech vaccine no matter how much it is.

Zhang Hai lost his father during the pandemic last year. He told RFA: “I believe a lot of Chinese people want to be vaccinated with Pfizer-BioNTech vaccine, although the price is high.”

Wang explained that Fosun Pharma kept a low key in China about the Pfizer-BioNTech vaccine with the big concern of the regime’s censorship.

“It just said a German vaccine. It didn’t dare to mention that it’s a Pfizer vaccine,” Wang added.