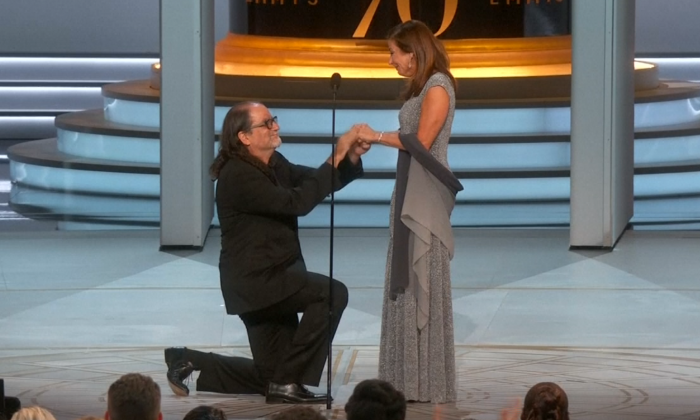 For the first time in the history of the Emmys, an award winner proposed to his girlfriend during the live broadcast.

Director Glen Weiss proposed to his girlfriend Jan Svendsen during his acceptance speech on Sept. 17.

Weiss won his 12th Emmy Award for directing the Oscars Awards show. He addressed Jan right after he thanked his mother, daughters, and friends.

The audience began to stand up one after another cheering for them.

Svendsen, sitting in the audience, felt so shocked at first, then with tears in her eyes she nodded very quickly.

After Svendsen walked up to the stage, Weiss got down on his knee and proposed.

“This is the ring that my dad put on my mum’s finger 67 years ago and to my sisters and brothers, I didn’t swipe it! Dad knows I have it, ok? Jan, I want to put this ring that my mom wore on your finger in front of all these people and in front of my mom and your parents watching from above. Will you marry me?”

She happily said, “I love you” and “Yes.” He then thanked the academy and everyone present.

This became one of the highlight moments, and for sure the sweetest one, of the 2018 Emmy Awards.

It went viral on Twitter that someone tweets, “Best speech ever!” while another tweets, “taking home the Emmy and a fiancé!”

The lovebirds met in 2001 and worked together for about 10 years. Only Weiss’s father knew his plan beforehand, according to Variety.