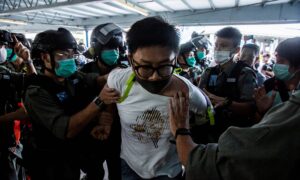 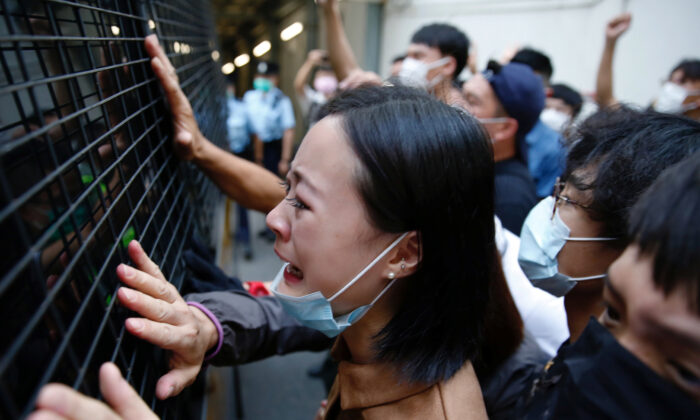 A family member cries and bid farewell to a prison van after pro-democracy protester Sin Ka-ho has been sentenced four years for rioting, in Hong Kong, China, on May 15, 2020. (Tyrone Siu/Reuters)
HK Protests

HONG KONG—A 21-year-old Hong Kong lifeguard, the first pro-democracy protester to plead guilty to the charge of rioting during last year’s unrest, was sentenced to four years’ jail on May 15 for a “direct attack on the rule of law.”

Sin Ka-ho was among thousands who surrounded the Legislative Council on June 12 in a bid to stop lawmakers from giving a second reading to a since-withdrawn bill that would have allowed extraditions to mainland China.

A few dozen protesters, many wearing black and holding a banner reading, “Liberate Hong Kong, Revolution of our times,” gathered outside the court, chanting, “there’s no rioters, only tyranny.”

As Sin was driven away in a van, some protesters knocked on its windows and shouted, “Stay strong!”

The protest at the Legislative Council was the first of many last year that police cleared with tear gas and rubber bullets, angering moderate Hong Kong people in a pivotal moment for the pro-democracy movement.

Protesters’ demands broadened to include calls for greater democracy amid anger at what they say is Beijing’s meddling with the city’s autonomy.

Sin admitted to pushing police barricades and hurling umbrellas and other objects at officers, but denied planning the assaults.

The defendant’s actions were “a direct attack on the rule of law,” District Court Justice Amanda Woodcock said in the sentencing, which is seen as potentially laying down a marker for the nearly 600 protesters who have been charged with rioting, risking up to 10 years in jail.

Neither Sin nor his lawyer commented on the sentence.

Sin has been the only one so far to plead guilty, in a symbolic blow for the protest movement, whose demands include amnesty for all those arrested and the government dropping its characterization of the protests as “riots.”

Hong Kong, a former British colony, returned to Chinese rule in 1997 with the guarantee of keeping its freedoms, many of which are not enjoyed on the mainland, including an independent judiciary.

The protesters’ main demands are universal suffrage and an independent inquiry into the police’s handling of the demonstrations.

Accusations of police brutality must not be used as “a weapon of political protest,” the police watchdog said in a report on Friday.

More than 8,300 protesters were arrested between June 2019 and mid-May this year. Over 1,600 have been prosecuted, and 595 face rioting charges.

Sin’s sentence was reduced from six to four years due to his clear record and guilty plea.

Demonstrations are likely to pick up in the summer after a relative lull this year due to social distancing measures taken to fight the CCP (Chinese Communist Party) virus pandemic, which first began in the central Chinese city of Wuhan. Hong Kong, the virus has largely been brought under control.

By Sharon Tam and Jessie Pang. Epoch Times staff contributed to this report.