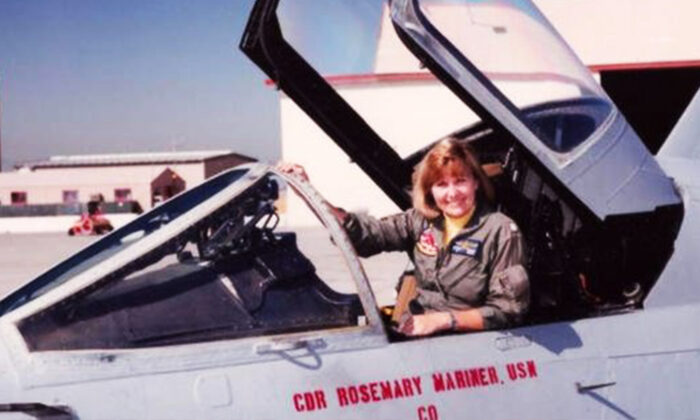 “Put a wall in front of me and my reaction is to knock it down,” the late Captain Rosemary Mariner of the United States Navy told the LA Times. Mariner flew higher than any other woman before her, literally and figuratively. In 1974, she became the first woman to fly a fighter jet in the world, later becoming the first to land one on an aircraft carrier; in 1990 she was the first woman to command a fighter squadron, and she fought in Desert Storm in Iraq.

So when this pioneering pilot passed away on Jan. 24, 2019, the Navy paid tribute to one of its legends with a special flyover formation, traditionally known as the “missing man,” as one jet pulls out of formation and ascends to represent the spirit of the fallen soldier.

Mariner’s tribute was even more fitting, as the four planes that flew in formation for her were all piloted by women whom she helped pave the way for.

There was a history of flight in Mariner’s family, as her father had served in the Air Force. He died in a plane crash when she was just a child, but that didn’t stop Mariner from dreaming of taking to the sky.

By 17, she had earned her private pilot’s license, and she was the first woman to graduate from the aeronautics program at Purdue University. Mariner just happened to come of age as the Navy allowed its first batch of eight female pilots in the air training program. Her missions included air and weapons testing. In 1982, she moved on to qualify as a Surface Warfare Officer, where she flew from the aircraft carrier U.S.S. Lexington.

In breaking glass ceilings, one after the other, Mariner was mindful of the African Americans who had come before her, once considered second-class soldiers. “My role models were African-American men who had led the vanguard in integration of race in the armed forces,” she said, per The Independent. “I studied many of the lessons that they had to pass on.”

As far as Mariner was concerned, the single biggest policy that needed to change was the ban on women in the Navy taking part in combat. When reports of female pilots being harassed by former commanders broke out, she pointed out that women not being able to fight was in part responsible.

“If you cannot share the equal risks and hazards in arduous duty, then you are not equal,” Mariner asserted. “Then it’s not a big leap for bigots to decide that well ‘well, I can harass you and I can get away with it.’”

Mariner and her fellow Navy women won the argument, and in 1993 the ban on women in combat missions was lifted. She continued to serve until her retirement in 1997. After pursuing a Master’s Degree at the National War College, she served as an aide to the Joint Chiefs of Staff at the Pentagon. In her retirement, she lectured at the University of Tennessee and continued to inspire the next generation of female pilots.

For the female pilots who had the honor to participate in the flyover tribute, it was a humbling experience.

“If it weren’t for Captain Mariner and her contemporaries […] then we wouldn’t have been able to do what we did today in her honor,” Lieutenant Emily Rixley told the Knoxville News Sentinel.

Commander Stacy Uttecht concurred. “This has probably been the coolest thing that I’ve done in my 19-year career,” she said.

Mariner’s husband, Tommy Mariner, told ABC that “her real goal became not to be exceptional, but to be the first person that opened the door, but left it open for others to follow her through.” The brilliant tribute the all-female team paid to her in the sky itself proves her legacy has succeeded.