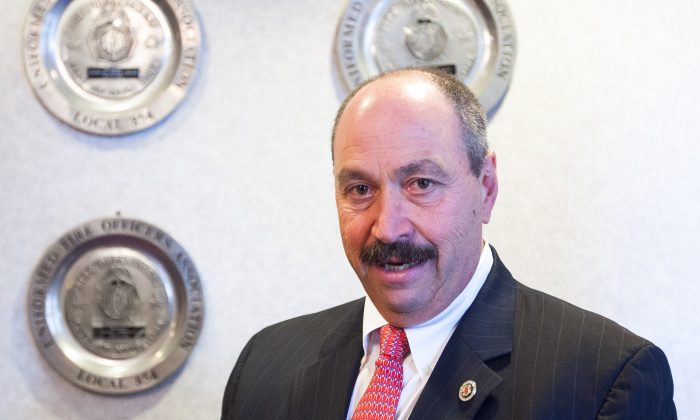 Firefighters Still Dying Due to 9/11

NEW YORK—Their family homes in Brooklyn were a stone’s throw apart. They played together, grew up together, and took up the same profession–Daniel “Sam” Heglund and Robert E. Leaver became firefighters.

Little did they know that one day they would leave this world together as well. They both died on Monday, together with retired FDNY Lt. Howard Bischoff. But it wasn’t a fire that took their lives. They all died of “9/11-related” cancers and respiratory illnesses.

“Last night we lost our hero to a long battle with 9/11 related cancer. He lived his life to the fullest and fought every blaze and battle with all he had. We love you and miss you forever. Golden slumbers fill your eyes, smiles awake you when you rise,” Daniel Heglund’s daughter Amanda Ray posted Monday on her Facebook page together with an old picture of her with her father.

After terrorists struck New York City’s World Trade Towers on Sept. 11, 2001, Heglund, Leaver, and Bischoff, together with thousands of other public servants, went downtown to help in the aftermath. Images from that time show the first responders covered in fine-grained white dust left by the collapsed skyscrapers. Soon it was clear the rescue and recovery efforts would take a toll on the workers’ health.

“We operated for months in a toxic stew,” said James Lemonda, president of the Uniformed Fire Officers Association, a higher-ranking FDNY staff union member, at a Thursday press conference. “I believe many people went down there knowing what their fate would be.”

Respiratory illnesses were the first to manifest, but further studies indicated the ground zero air could cause, or at least add to, the development of cancers. Lemonda said the ranks he represents lost 92 officers so far, and the numbers are “spiking.” In fact, just past Saturday, they buried another retired lieutenant, who died of the same cause.

In 2011 a law was passed to pay for monitoring and treatment of 9/11 related illnesses–the Zadroga Act, named after the first victim of an illness directly tied with 9/11. It pays for all medical expenses related to such illnesses not covered by the patients’ insurance. It also reopened compensation programs for victims and their family members.

The law had a difficult time gaining congressional approval though, as many Republicans said it was too expensive and inefficient to create a whole new system of medical benefits just for one group of people. In the end, it went through with concessions. Primarily, the law would expire in five years, some parts as early as October 2015.

So far, about 60,000 people have registered for monitoring under the Zadroga Act, with over 30,000 sick because of working at ground zero, among those almost 3,000 have cancer.

A New York-based coalition, including U.S. Rep. Carolyn Maloney, is now pushing for reauthorization of the law. Though claiming the push to be bipartisan, it is not clear how many Republicans actually support the plan to prolong the Act by at least 25 years.

So far, Republican U.S. Rep. Peter King is on board.