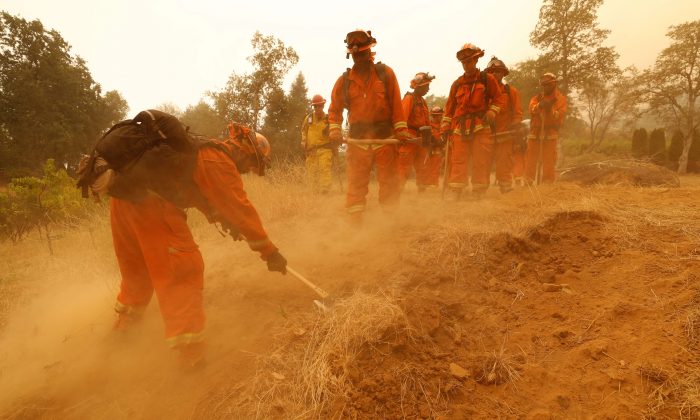 An inmate fire crew cuts fire lines in hot and smoky conditions while working to stop the spread of the Carr Fire, west of Redding. (Reuters/Fred Greaves)
US News

REDDING, Calif.—California firefighters on Monday, July 30, gained ground on a massive wildfire that has killed six people and destroyed hundreds of homes, while rescuers searched for at least seven missing people.

The Carr Fire ignited a week ago outside Redding, about 150 miles (240 kilometers) north of Sacramento, and doubled in size over the weekend, charring an area half the size of New York City and forcing 38,000 people to flee their homes. Two firefighters, a 70-year-old woman and her two young great-grandchildren were among the dead. Authorities have yet to identify the sixth fatality.

California is bearing the brunt of an extreme run of wildfires across the U.S. West, with erratic winds and record high temperatures charging blazes that have blackened nearly 410,000 acres, the state’s highest year-to-date level in a decade.

Four wildland firefighters have been killed in California in 2018, twice as many as in all of 2017, with Carr Fire deaths blamed on swift-moving “firenado” whirlwinds of flames and ash.

“I’ve been a lifelong resident of this community, and I’ve never seen a fire with such destruction here in this area ever before,” Shasta County Supervisor Leonard Moty said of the Carr Fire during a news briefing.

The blaze is the deadliest of the 98 wildfires burning across the United States. Collectively, wildfires have scorched 4.6 million acres (1.8 million hectares) this year, 24 percent more than the 10-year average for the period, according to federal data.

Nearly 3,400 firefighters battling the Carr Fire have begun to gain control of it, cutting containment lines around 20 percent of its perimeter by Monday morning, according to the California Department of Forestry and Fire Protection (Cal Fire).

Gale-force winds that drove the fire last week have eased to moderate speeds, but temperatures are set to remain above 100 degrees Fahrenheit (37.8 Celsius), the National Weather Service said.

Nearly 1,000 homes and other buildings have been destroyed around Redding. Melody Bledsoe, 70, died, together with her great-grandchildren ages 4 and 5 as she held a wet blanket over them, her granddaughter Amanda Woodley said on Facebook.

Residents posted photos of wandering dogs and horses left behind by owners in the rugged region, a popular fishing destination. Evacuation orders were lifted on some areas on Monday.

National Guard troops and police officers were stationed in evacuated neighborhoods to guard against looting.

Two other California blazes 30 miles (48 km)apart in Mendocino and Lake counties forced the evacuation of over 10,000 people. They were among 17 burning across the state.