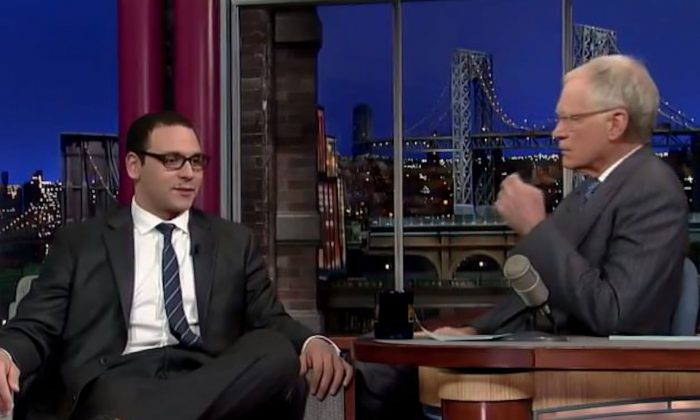 Fired Anchor, Letterman: A.J. Clemente (L) discusses his first and last day on the job as a KYFR-TV anchor on "The Late Show" April 24, 2013. (Screenshot via The Epoch Times)
Entertainment

Fired anchor on Letterman: A.J. Clemente, who lost his job after accidentally cursing when he didn’t realize he was on-air during his first news broadcast for KYFR-TV, discussed the incident with a sympathetic David Letterman Wednesday night.

A.J. Clemente’s first night as a broadcaster for NBC’s North Dakota affiliate KYFR-TV was his last. On Sunday, April 21, he cursed at the beginning of the broadcast, not realizing the cameras had started rolling.

On Monday night, a sympathetic David Letterman said on his late night show, “It could have been me.”

“It’s like a page torn from the Dave Letterman ‘Book of Life,’” he joked. Letterman honored Clemente with a top ten list titled “Signs Your First Day as a News Anchor Didn’t Go Well” (see video below).

On Wednesday, April 24, Clemente appeared on The Late Show With David Letterman.

“Did you think that your life was finished when this happened?” Letterman asked. “Extremely,” Clemente replied. “I went home, crawled in bed, and called my parents.”

But, he added, “You got to pick yourself up, laugh at yourself.”

Letterman asked him if he would take the job back in Bismark, N.D., if it were offered.

“I’ve thought about it,” Clemente said, “but if ESPN comes knocking …”

Letterman told him to “forget ESPN, that ain’t going to happen.”

“I’m trying to get you the job back in Bismark,” he said.