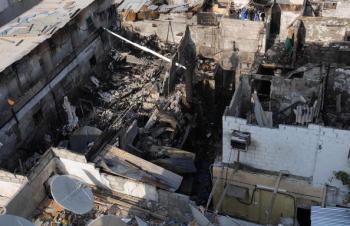 A picture shows damage caused by a fire that broke out in a hostel in the Naif old quarter of the Gulf emirate of Dubai on August 27, 2008. (-/AFP/Getty Images)
Middle East

Fire Rips Through Villa Where 500 Workers Were Housed

DUBAI–A fire broke out in a heavily overcrowded villa in Dubai where 500 Indian workers were living. Eleven died in the blaze.

Witnesses said they saw men leaping from windows as flames engulfed the converted bungalow in the Deira area at dawn on Tuesday.

The men were expatriate blue-collar workers and had lived cheaply in the squat so they could send money back to their families in India.

Two Asian men were arrested and charged on Wednesday with violating health and safety regulations after they divided the one-storey villa into numerous living spaces.

“Two brokers who have rented the villa from the owner are being questioned in connection with the living arrangements that were set up inside the villa which caught fire early,” said Abdul Jaleel Mahdi Mohammed, deputy director of preventive security at Dubai police.

“The charges they are facing include the fitting of an additional makeshift floor, which [had] been added into the house using wooden materials to built a ceiling. Wooden material was also used to build dividers to separate the living spaces. The men used the house they rented to rent out the created rooms to a large number of people who were living there illegally.”

At the scene belongings of some of the men lay strewed around the blasted house. Many of the survivors are destitute.

“This is where I had kept my bag with all my papers and money,” one man told the English language newspaper The National. “There is no sign of it now.”

The Indian Embassy has housed 42 of the men in temporary accommodation in the Al Qouz industrial area of Dubai. They are being provided with food, water and some money until permanent arrangements can be made. It is not known what has become of the other survivors.

The Indian Embassy will pay for the bodies of the deceased to be flown back to their loved ones.