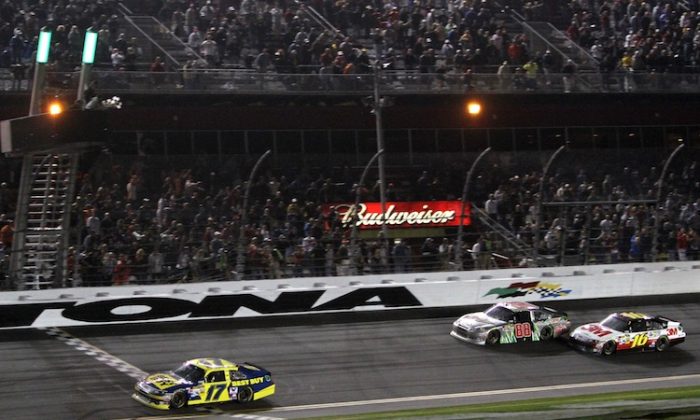 The 2012 NASCAR Daytona 500 was hyped (as are all NASCAR races) as an epic contest, a once-in-a-lifetime (annual) event: The Great American Race, the promoters call it un-ironically.

This time the race lived up to the hype. Sort of.

Delayed by rain for the first time in its 54-year history, run at night in prime time for the first time, almost stopped due to a freak fire, and finally (as usual) ending with a Green-White-Checker sprint, this year’s Daytona 500 generated anticipation and excitement beyond other years.

The primary question was would the race happen at all? The race was delayed by rain Sunday afternoon and again Sunday evening, and then again postponed until Monday at noon. Never before had Mother Nature refused to cooperate entirely. Several 500s have been delayed, interrupted, or shortened by rain, but every one of then went off as scheduled on Sunday—until this year.

Everyone—fans, teams, and track officials—were eager for Monday, and worried about Monday’s forecast: rain, followed by rain and more rain. At the rescheduled noon starting time, NASCAR announced that the race would go off at 7 p.m.—this would allow enough time for the tracks jet-dryers (helicopter turbine engines towed behind super-duty pickups) to get the track ready, if the rain slowed in mid-afternoon. Otherwise the race would have to run Tuesday, and if that didn’t work, maybe in April.

Fans watching on TV weren’t too upset; with DVRs even a daytime race could be recorded, and if the race ran in the evening, even West Coasters could hurry home from work and see most of it live. For track officials and teams the story was different.

NASCAR fans tend to be pretty dedicated; most of them stayed until Monday, stretching their hotel reservations and rerouting their travel plans (and presumably calling in “sick” to work.) But Tuesday? Likely track attendance would have plummeted. This would have made for a sad spectacle on TV, and mocked the announcers’ repeated references to “The Great American Race.”

Teams were anxious because they not only wanted to race, the also had to clean, repair and pack their cars and all their gear to ship it to Phoenix by Friday morning for the next race on the schedule. It would be tough after a Monday event; almost impossible to do right if the race ended Tuesday evening.

NASCAR caught a break Monday evening; the rain let up, the jet dryers had enough time to prepare the track, and almost all the fans stuck around; the grandstands and the infield were packed with fans, eager to finally watch the race.

The Pack Is Back

After all that built-up tension, all that anticipation, the race needed to start with a bang and keep on exploding—a dull race would have hurt a more than a postponed race.

Here NASCAR had done itself some favors. After a season of tandem-drafting Superspeedway racing, where two cars together were faster than either single cars or the pack, the series had re-written the rules.

Fans didn’t like the tandem racing; neither did drivers. NASCAR responded by shrinking radiators and radiator grill openings for restrictor-plate tracks. Now cars which teamed up couldn’t stay together nose-to-tail and blithely cruise away from the pack, because the car in back would overheat and blow its engine.

These changes, coupled with a shorter rear spoiler and longer rear bumper, made it positively dangerous to bump-draft (push cars to go faster) in anything but a perfectly straight line, and for short periods of time.

This brought the pack…