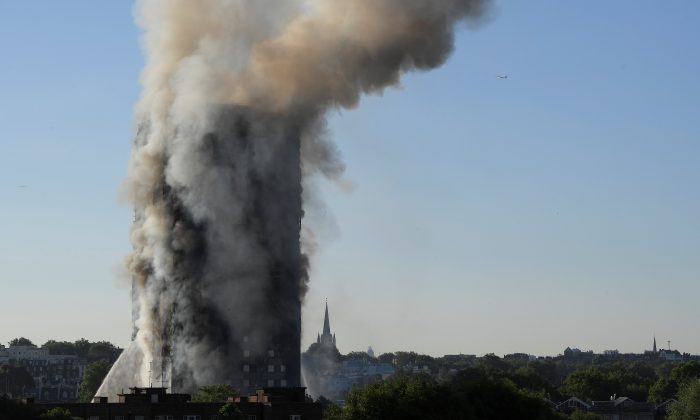 Smoke billows as firefighters deal with a serious fire in a tower block in West London, Britain on June 14, 2017. (REUTERS/Toby Melville)
UK

LONDON—Fire engulfed a 24-floor housing block in central London in the early hours on Wednesday, killing at least 12 people and injuring 70 others in an inferno that trapped residents as they slept.

Flames raced through the high-rise Grenfell Tower block of apartments in the north Kensington area after taking hold around 1 a.m. and witnesses reported some residents screaming for help from windows of upper floors and others trying to throw children to safety.

More than 200 firefighters, backed up by 40 fire engines, fought for hours to try to bring the blaze, one of the biggest seen in central London in memory, under control.

By mid-day, London police said six people had been killed and they cautioned the death toll was likely to rise.

Police Commander Stuart Cundy said a “recovery operation” could take some time and there could be people in the building who are unaccounted for, though he would not give a figure.

Firefighting crews still had to reach the top four floors of the building where several hundred people live in 130 apartments.

The cause of the fire, which left the tower block a charred, smoking shell, was not immediately known.

The block had recently undergone an $11.08 million refurbishment of the exterior, which included new external cladding, replacement windows, and curtain wall facades.

Plumes of black smoke billowed high into the air over the British capital for hours after the blaze broke out. Residents rushed to escape through smoke-filled corridors after being woken up by the smell of burning.

London Fire Brigade said the fire engulfed all floors from the second to the top of the 24-storey block. There were reports that some residents leapt out of windows to escape the flames.

One woman lost two of her six children as she tried to escape from the block, one witness said.

“I spoke to a lady that lives on the 21st floor. She has got six kids. She left with all six of them. When she got downstairs there were only four of them with her. She is now breaking her heart,” Michael Paramasivan, a block resident, told BBC radio.

Other witnesses spoke of children, including a baby being thrown to safety, from windows high up.

“In my 29 years of being a fire fighter, I have never ever seen anything of this scale,” London Fire Brigade Commissioner Dany Cotton told reporters.

Firefighters rescued large numbers of people—some of them in their pyjamas—from the 43-year-old block, a low rent housing estate which overlooks upscale parts of the Kensington area.

“There were bits of building falling off all around me, I scalded my shin on a hot piece of metal that had fallen off the building,” said Jodie Martin, who lives close to the building and had gone to the scene to try to help.

“I was just screaming at people: ‘Get out, get out’ and they were screaming back at me: ‘We can’t, the corridors are full of smoke,'” he told BBC Radio.

The BBC reported that a political deal between the government of Prime Minister Theresa May and a small Northern Irish party could be delayed because of the aftermath of the fire.

Residents said they had been warned repeatedly over fire safety in the block.

London‘s mayor Khan said questions needed to be answered over the safety of tower blocks after some residents said they had been advised they should stay in their flats in the event of a fire.

A local residents association had previously said it was worried about the risk of a serious fire in the block.

“These questions are really important questions that need to be answered,” Khan said.

“What we can’t have is a situation where people’s safety is put at risk because of bad advice being given or if it is the case, as has been alleged, of tower blocks not being properly serviced or maintained.”

Ash Sha, 30, who witnessed the fire and has an aunt in the building who managed to escape from the second floor, said the local council had recently renovated the tower.

“They cladded the outside and insulated the inside,” Sha said. “The insulated material is very similar to sponge so it crumbles in your hand. This was just done to tart it up [improve the appearance] and match the nearby building.”

The local council of Kensington and Chelsea, which owns the block, said it was focusing on supporting the rescue and relief operation. It said the causes of the fire would be fully investigated.

Police closed the A40, a major road leading out of west London, while some parts of London‘s underground train network were closed as a precaution.

By Kylie MacLellan and Toby Melville