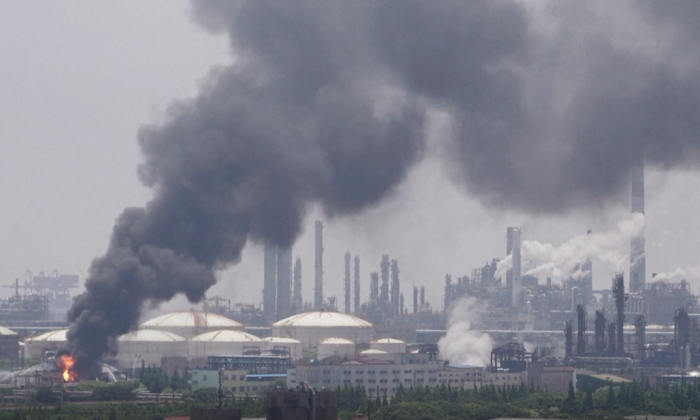 Smoke comes out from a Sinopec Shanghai Petrochemical plant in the Jinshan district of Shanghai on June 18, 2022, in a still from video. (Reuters/Screenshot via The Epoch Times)
China

A fire broke out at a Sinopec Shanghai Petrochemical Co. Ltd. plant in Shanghai early on Saturday, killing one person, the company said.

Roaring fire was seen engulfing part of a sprawling factory, emitting columns of thick black smoke, in a video by the fire department showed.

The fire at one of China’s biggest refining and petrochemicals plants started around 4 a.m. Saturday and had been brought under control by 9 a.m. but “was difficult to handle,” state media Xinhua reported, citing fire officials. It was expected to continue burning for some time.

The driver of a third-party transport vehicle died and a company employee suffered a minor injury, said a Sinopec representative. He said the fire affected the ethylene glycol facility at the plant in Jinshan, a southwestern suburb of China’s financial capital.

State-owned Sinopec said on its official Weibo account it was monitoring volatile organic compounds and impact to rainwater outlets, and no impact on the surrounding water environment had been found.