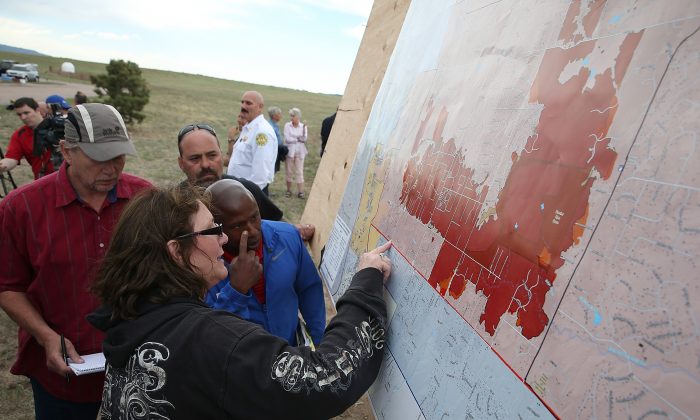 Residents look at a map showing the areas damaged by the Black Forest fire in Colorado Springs, Col., on June 14, 2013. John Bissett, president of the Housing and Building Association of Colorado Springs, shares his story of personal hardship and professional feats as the fire nears containment on June 19, 2013. (Justin Sullivan/Getty Images)
US

As he began to pack a few of his belonging into his motor home, it hit John Bissett that his entire El Paso County house could be destroyed by what is now Colorado’s most destructive wildfire. The fire burned a mile or two from his house.

The fire has destroyed 502 homes and the number is expected to rise. Nearly 14, 280 acres are charred. As of Tuesday, the Black Forest fire is 85 percent contained.

Bissett, president of the Housing and Building Association of Colorado Springs, was under mandatory evacuation and left his home on Wednesday, June 12, 2013. He’s kept in touch with the Epoch Times ever since.

He spent Thursday night in a grocery store parking lot. He described the experience as “surreal.” While he said there was nothing to do but wait, he certainly did not wait around idly.

Back at work on Friday, he sought adequate staffing at a crisis management center to help homeowners and the association’s 475 house-building trade members.

While he is a bit partial to the Housing and Building Association member services, overall, he advises residents to use businesses that are local to their area. These businesses know the area, and have relationships with the local building officials.

On Friday, at least 70 families visited the center for information, according to Bissett.

After a busy day at work, Bissett found encouraging news. His mandatory evacuation order was downgraded to a pre-evacuation status and he could go back home, but he had to be ready to leave his house at a moment’s notice.

He kept his phone right by his bed, just in case the reverse 911-phone call rang him with a public safety communication alert. As of Monday, it hadn’t.

Bissett said that while he is encouraged, he is not complacent. Still on pre-evacuation status, his motor home remained packed in his front yard.

With the Black Forest fire nearing containment, Bissett said, “As I look to the south, ’cause I’m north, I don’t see the plumes of smoke that we used to see [last week].”

Evacuated and Staying Atop of Work

At work on Monday, Bissett was called up to Denver to give his expert advice to the Wildland Fire Task Force—a force created by Colorado Gov. John Hickenlooper in January 2013.

More than 25 percent of Colorado’s population lives in the Wildland Urban Interface (WUI), where communities sit on the fringes of forested lands. And 40 percent of new residential development in the state is estimated to be at risk of wildfires, stated the governor’s order.

The task force is charged with seeking out experts, getting them together, and creating recommendations for the governor, legislature, and others, so as to reduce and mitigate risks in wildfires.

According to Bissett, 20-30 individuals from all disciplines related to residential building, insurance, and forestry attended the task force meeting on Monday.

Barbara Kelley, executive director of the Dept. of Regulatory Agencies and chair of the force, said that the WUI presents its challenges with new developments, new projects, and people wanting to live in very beautiful areas of Colorado.

Bissett’s explained to the task force how the newer homes fared better than the older homes in the fire.

His office looked at all of the homes listed as destroyed on the Sherriff’s website, and looked at the year they were built according to the El Paso County Assessors Office records. They found that the homes destroyed in the Black Forest area were a mixture of homes built in the past 13 years, in the past 30 years, and many were homesteads built in the early 1900s.

“It was very informational to see that there is a difference between what can be constructed under current, more relevant building codes,” Kelley said.

Moving forward, Kelley said the task force will have work groups break down possible implementations and see if they will be effective before they give their recommendations.

With the Black Forest fire nearly contained, Bissett said he is most thankful to the fire department, The National Guard, the military, and the sheriff’s office.

They “have done one of the most amazing jobs of coordinating this effort that I have ever seen, and if nothing else, those folks deserve the utmost recognition,” he said.

“Those guys have really, in my opinion, exceeded emergency management. I am completely thankful for that.”