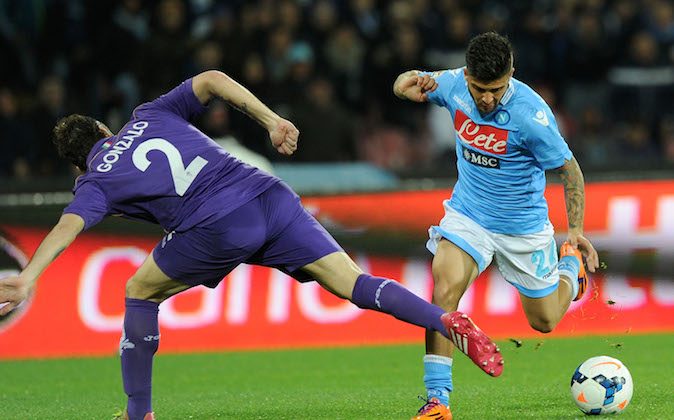 Gonzalo Rodriguez of Fiorentina and Lorenzo Insigne of Napoli in action during the Serie A match between SSC Napoli and ACF Fiorentina at Stadio San Paolo on March 23, 2014 in Naples, Italy. (Photo by Giuseppe Bellini/Getty Images)
Webstream

Fiorentina vs Napoli 2014 Coppa Italia Final is set for Saturday, May 3.

The game will be broadcast on RAI Uno in Italy.

Here is an AP preview of the final.

It’s going to be an emotional match for Fiorentina coach Vincenzo Montella, who was born and raised in the Naples area.

But there’s no time for distractions with Fiorentina chasing its first Cup title since 2001.

Napoli last won in 2012 when it beat Juventus in the final.

Both sides have significant injury worries.

Napoli is hoping standout forward Gonzalo Higuain can play despite a right leg problem that saw him stretchered off last week and Fiorentina forward Giuseppe Rossi could be available from the bench for his first action since his latest knee injury in January.

Fiorentina is without key attacking midfielder Juan Cuadrado, who is suspended.

On Friday, both squads have an audience scheduled with Pope Francis.