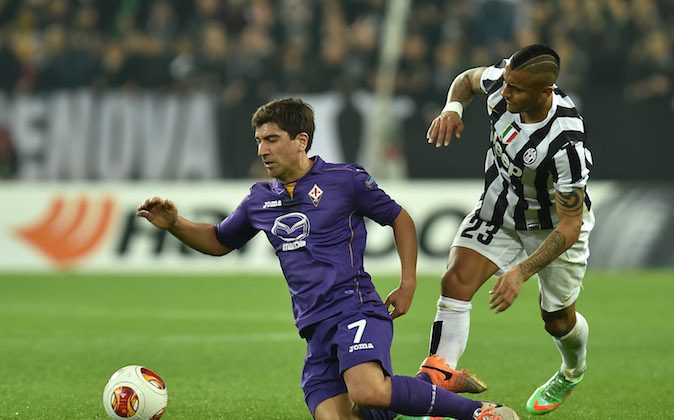 Arturo Vidal (R) of Juventus tackles David Pizarro of ACF Fiorentina during the UEFA Europa League Round of 16 match between Juventus and ACF Fiorentina at Juventus Arena on March 13, 2014 in Turin, Italy. (Photo by Valerio Pennicino/Getty Images)
Soccer

The game will also air on ESPN Deportes and Fox Soccer Plus,  in the United States.

Four days after beating Fiorentina to stay on course to retain the Serie A title, Juventus is hungry for another victory over its Italian rival — this time in the Europa League.

“Fiorentina was good for lunch,” Juventus said on the club’s official Twitter feed after a 1-0 win, “we’ll see each other again in four days, for dinner.”

Juventus is the big favorite as it sits top of the Italian standings, 27 points clear of the Viola.