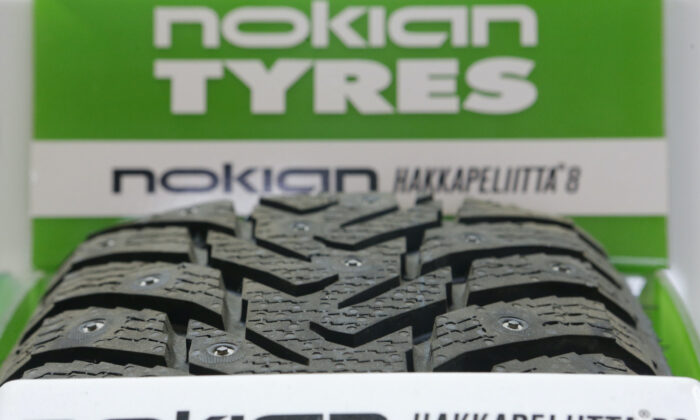 A Nokian tire is on display at a tire assembling center and shop in Moscow, on Aug. 8, 2014. (Maxim Shemetov/Reuters)
Companies

HELSINKI—Finland’s Nokian Tyres PLC said on Tuesday it would continue production in Russia to retain control of its local factory, at a time when many companies are halting operations in protest at Russia’s invasion of Ukraine.

“By continuing to operate the passenger car tyre factory in Russia we want to make sure that the factory is operated and controlled by Nokian Tyres also in the future,” it said.

The company also said this would also help ensure its products were not used for military purposes.

Before the Ukraine war, Nokian produced about 80 percent of the 20 million tires it makes a year in Russia. It makes passenger car tires in Russia, while tires for heavier vehicles are made in Finland or elsewhere.

Shares in Nokian fell as much as 13 percent on Monday, after Helsingin Sanomat daily and other Finnish media reported that the company had seemed to tell analysts in a call last week that it would seek to win market share from rivals that are exiting Russia, such as Michelin, Continental, and Bridgestone, or those curtailing activities there, such as Pirelli.

Nokian denied this on Tuesday. “On Sunday Nokian Tyres was in the spotlight in the media regarding an analyst call,” it said, saying it was now making a “correction to the media.”

Nokian Chief Executive Jukka Moisio told Helsingin Sanomat in an interview published on Monday that the company did not want its Russian factory to end up “in wrong hands” to avoid its Russian factories being used to make tires for the military.

“In our opinion it is better that the factory is in our control than in someone else’s,” Moisio told the paper.

Russia’s ruling party said this month a government commission had approved the first step towards nationalizing assets of foreign firms that leave the country.

Nokian said it would seek to boost capacity more swiftly at its factories in Finland and in the United States and would look for additional capacity elsewhere.