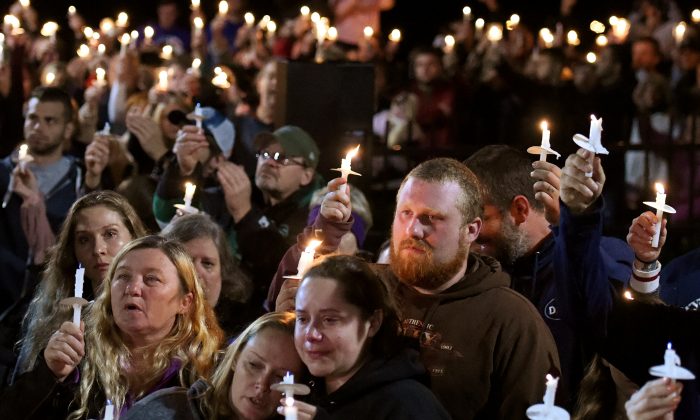 Mourners gather during a candlelight vigil for the victims of a limousine accident in Amsterdam, N.Y., on Oct. 9, 2018. REUTERS/Cindy Schultz
Crime and Incidents

NEW YORK—Lawyers for the family of a limousine driver who died along with 19 others in an upstate New York accident and the owner of the vehicle are clashing over the cause of the deadliest U.S. transport accident in nearly a decade.

New York State police said the driver, 53-year-old Scott Lisinicchia, did not have the proper license to operate the 2001 Ford Excursion limousine that crashed in Schoharie, New York, late on Oct 6 and that the vehicle had failed inspection last month.

A lawyer for Prestige Limousine, which owned the vehicle, said the safety violations that led it to fail inspection last month were largely minor and did not cause the crash.

“I don’t think that these infractions were what led to the tragedy,” attorney Lee Kindlon told CBS News in an interview.

Reuters was not able to reach Prestige Limousine for comment and the company’s listed phone number was disconnected.

But a lawyer for the driver’s family said the limo had problems.

“The family believes that unbeknownst to him he was provided with a vehicle that was neither roadworthy nor safe for any of its occupants,” the lawyer, George Longworth, said in a statement.

Lisinicchia’s twin brother Keith said Scott was an experienced and conscientious driver who was properly licensed.

“I know that he always kept his license up. I mean it was a CDL (commercial driver license) license,” Keith Lisinicchia told WRGB TV in Albany, New York.

Before the limousine crashed on the way to a birthday party, one of the victims, Erin McGowan, texted a friend that the limousine appeared to have engine trouble, the New York Times reported.

McGowan’s aunt, Valerie Abeling, told CNN her niece had texted a friend saying the company had sent the stretch limousine to replace a vehicle that had broken down.

All three vehicles owned by Prestige Limousine, which is based in Gansevoort, New York, had violations when they were inspected last month, U.S. Department of Transportation records show.

The inspection of the limousine that crashed had turned up several violations, including some involving anti-lock brake malfunction indicators and inoperative or defective windshield wipers.

Those killed in the crash included two pairs of newlyweds, four sisters from one family, and two brothers from another.

New York Governor Andrew Cuomo ordered flags in the state lowered to half-staff, adding on Twitter that “It is hard to fathom the extent of this tragedy.”

At the Oct 8 Columbus Day Parade in New York City, Cuomo told reporters that Prestige Limousine was being sent a cease-and-desist order to halt operations until authorities investigated the accident.

State police and the National Transportation Safety Board (NTSB), which are investigating the cause of the crash, will look at safety regulations for limousines, whose passengers are not required to wear seatbelts.

The vehicle ran a stop sign at a highway intersection in Schoharie, about 40 miles west of Albany, police and the NTSB said.

It crashed into an unoccupied parked car and two pedestrians before coming to a rest in a shallow ravine, officials said, killing the driver, all 17 passengers, and the two pedestrians.