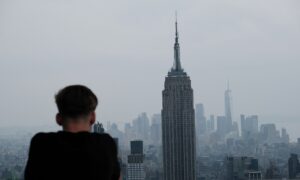 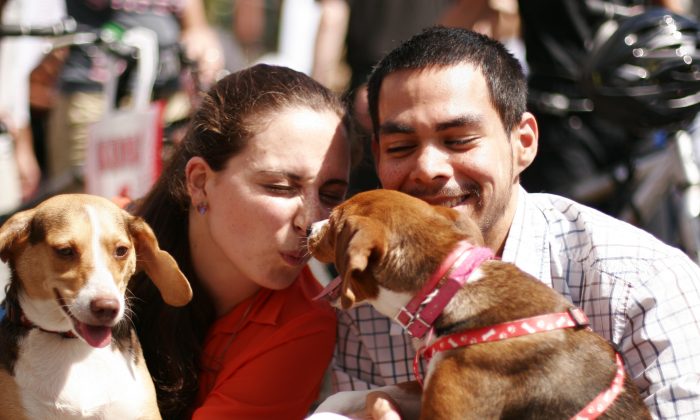 NEW YORK—Milena Giunco bent down to look at her newly adopted dog and got a big friendly hello as the puppy jumped up to rub noses with her.

Giunco and her boyfriend Anthony Olivence were among thousands who visited the Adoptapalooza pet adoption event on Union Square Sunday, Sept. 8. The annual event brought together more than 40 different animal rescues and shelters with 300 cats, dogs, and rabbits looking for new homes.

“We love dogs. We would never buy from breeders,” Giunco said. “It’s much better to go through adoption because the dogs went through something horrible sometimes and they really appreciate you.”

There was lots of petting, generous giveaways, and even Bocker the Labradoodle, the celebrity dog who starred in movies and TV commercials.

“Bocker is very well known in the adoption circles,” Marie Shelto, Bocker’s owner, said. “He’s always ready to lend a helping hand. This is the most important thing in the world to us.”

Adoptapalooza is organized by the Mayor’s Alliance for NYC’s Animals, a nonprofit, which is not affiliated with the city government. The alliance’s goal is to reduce the number of animals euthanized in the city through adoption events like Adoptapalooza and other efforts. Since the alliance was founded in 2003, the number of cats euthanized at the city’s Animal Care and Control shelters decreased from 32,000 to 8,000 per year.

“We’re going to reduce it even further this year,” said Jane Hoffman, the president and founder of the Mayor’s Alliance for NYC’s Animals. “It’s the whole city’s animal community working together.”

Ray Brown, a parks department employee and Manhattan resident, had never owned a dog and had never thought of getting one. But, 10 years ago, he visited the first of the alliance’s adoption events and ended up adopting Baby, a gentle pit bull with soft facial features and large, calm eyes.

“I was there checking on my offices and I fell in love with her,” said Brown, who came to Adoptapalooza to promote pet adoption. “Look at what you get!”

Baby looked up with an expression that could be best described as smiling.

Petco is one of the partners of the annual event. The company does not sell cats, dogs, or rabbits in its stores and promotes adoption nationwide. Josh Axelband, the general manager at the Petco store on Union Square, just adopted his own dog, Charlie, in June. He said there were more people at this year’s event compared to last year’s.

“We’re ecstatic,” Axelband said. “It’s great to see the number of New Yorkers that are coming out to adopt.”

Approximately 200 animals were adopted at the event and some 400 applications were filled out for adoptions in the near future.

There was a two-legged creature, about 6-feet-tall, among all the four-legged ones. He stood on stage for pictures, gnarly teeth sticking out of a round, somewhat dazzled furry face.

The host asked if he would like to say something. A silence followed.

To be clear, the furry guise was just a suit. Chewbacca, the popular sci-fi character, was there to promote a new line of pet products inspired by “Star Wars.”