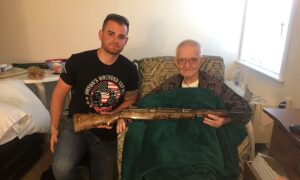 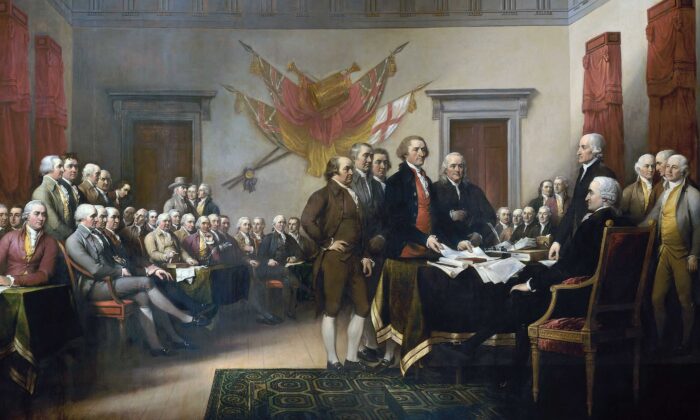 "The Signing of the Declaration of Independence," painted by John Trumbull, 1819. (Public Domain)
Viewpoints

Finding America’s Optimistic Future in Our Past

In the 1770s, Britain was the greatest imperial power on the planet. The idea that the 13 colonies could somehow challenge—let alone defeat—the British militarily was almost unfathomable.

And yet, by the beginning of 1775, the colonists realized their relationship with Britain needed to change dramatically and conflict could erupt as a result. What that change would look like remained unclear.

Some people advocated independence. But others thought there were other options. Indeed, right up until 1775, none other than Thomas Jefferson believed there was a possibility of Britain and the colonies coming to an arrangement that would keep the latter part of the British empire.

Regardless, the colonists knew something big was coming. They just didn’t know exactly what it would be.

The answer, of course, was revolution—and independence.

At its core, the American revolution wasn’t about the right to taxation; it was about whether the colonists were going to be free.

Before the Founders declared independence, societies had been organized as top-down hierarchies. Authority started at the top with a monarch or some other leader and flowed down through the nobility and down to the commoners.

But the Founders read the thinkers of the Enlightenment, from Locke to Montesquieu, and had an opposite understanding of political philosophy. They opposed hierarchies. They believed societies naturally flowed from the bottom up, with natural law—not power and authority—dictating the flow.

In other words, sovereignty and authority come from the people, who then delegate certain authority to leaders. But the underlying value is always freedom.

Unlike in Europe, which was full of hierarchical societies, the colonists lived out Enlightenment thinking. Indeed, the British left them to their own devices to make their way in the New World.

As a result, the colonists governed themselves independently, adopting what they read in Enlightenment philosophy. For example, all 13 colonies created their own legislatures, despite living in the shadow of British imperialism. They had no reason to do this unless they valued self-governance.

I discuss this history while reflecting on the significance of Independence Day last week on my podcast, “Newt’s World.” My guest is one of the nation’s most eminent historians, Allen Guelzo. A long-time friend and a best-selling author, Allen is director of the James Madison Program Initiative on Politics and Statesmanship and senior research scholar in the Council of the Humanities at Princeton University.

As Allen explains to me, by the period of 1765–1775, the lead-up to the revolution, the colonists had “created their own world”—a world quite similar to the thought experiment described in the works of Enlightenment philosophers.

Allen also details how, some decades after the revolution, a young historian asked a former militia captain why he and other colonists met the British at Lexington and Concord. The former captain’s response was simple: We had always governed ourselves, and they intended that we shouldn’t.

The colonists refused to accept a system in which they would be governed by faceless bureaucrats in London.

Americans were historically unique—dare I say exceptional—in their approach to governance. And this was largely dictated by culture more than anything.

It’s important to remember this history, even 245 years after the Founders declared independence. Today, many Americans are pessimistic about the future of their country—and for good reason. But looking at the overall arc of American history, it’s difficult not to be an optimist. The Founders endured revolution, Lincoln endured civil war, and they all remained ever optimistic about this country as humanity’s last best hope.

As John Adams predicted, American independence would be “the most memorable epoch” in the country’s history, celebrated for generations as a day of “deliverance.” Americans should continue to prove him right.