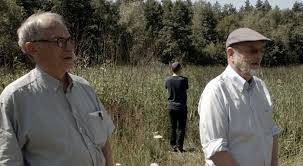 (L–R) Horst von Wächter, the son of Otto von Wächter, and Niklas Frank, the son of Hans Frank, have opposing views on their own father’s role in the extermination of the Jews during WWII. (Wildgaze Films)
Entertainment

Film Review: ‘What Our Fathers Did: A Nazi Legacy’

Wrestling with the National Socialist legacy
By Joe Bendel

Most Biblical scholars interpret passages regarding the iniquities of the father being visited upon his sons and grandfathers to mean a patriarch’s lack of sound moral guidance will potentially allow his progeny to follow his bad examples and repeat his mistakes. This is a most pertinent question for Horst von Wächter, the massively in-denial son of a high ranking National Socialist official.

In contrast, Niklas Frank, the son of the senior von Wächter’s direct superior, has no trouble condemning his father’s crimes against humanity. International law expert Philippe Sands will revisit the sins of the fathers with their two very different sons in David Evans’s “What Our Fathers Did: a Nazi Legacy,” which opens Nov. 6, 2015 in New York.

“What Our Fathers Did” is a documentary with real intellectual heft, but there are very personal stakes involved.

As one of the foremost experts on the Nuremberg military tribunals, Sands was quite familiar with Hans Frank, who was tried and executed for crimes against humanity. They also indicted Otto von Wächter, but the sheltered former governor of Krakow and Galicia escaped prosecution, until succumbing to kidney disease in 1949. However, the absence of a legal conviction looms large in Horst von Wächter’s revisionist view of his father.

Despite their radical differences, Niklas Frank and Horst von Wächter are sort of friends. One can imagine they share a bond of mutual early experiences few of their peers could relate to.

However, von Wächter’s childhood was clearly a happy one, whereas Frank’s was not. As a result, von Wächter is emotionally invested in protecting his stilted memory of a loving father, while Frank feels no such loyalty to the absentee autocrat he so clearly resents. That is all understandable to an extent, but von Wächter becomes willfully pedantic and legalistic when confronted with evidence of his father’s culpability. It seems nothing short of a full confession, signed and notarized in triplicate will satisfy his standards of proof.

This is where the drama comes in—and it is considerable. Chafing at his obstinacy, Sands and Frank become increasingly frustrated with von Wächter’s flimsy prevarications. Honestly, it is downright painful to watch his dissembling during a joint appearance with Frank and Sands, following the publication of the latter’s Financial Times article that first started their sometimes contentious association.

When Frank warns Sands his perhaps former friend might be susceptible to Neo-National Socialist recruitment, it is a heavy moment. Indeed, there are staggering scenes like that throughout “What Our Fathers Did,” in which von Wächter’s hairsplitting fiddlesticks are routinely contrasted with Frank’s unforgiving indictments.

In a way, the film is like a highly personal analogue to the Irving v. Penguin Books case, in which the defense proved Hitler was indeed aware of the systematic mass murder of Jews and Holocaust denier David Irving knowingly misrepresented facts to suggest otherwise.

“What Our Fathers Did” is a documentary with real intellectual heft, but there are very personal stakes involved. It is a fascinating and brutally honest, squirm inducing film.

Recommended for general doc audiences, “What Our Fathers Did” opens this at the Lincoln Plaza.