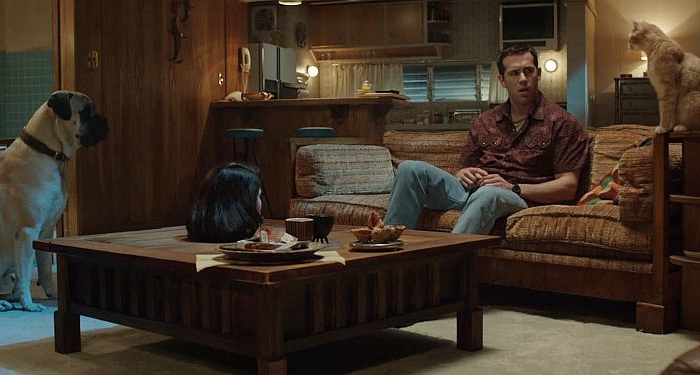 Ryan Reynolds is Jerry, who’s gone off his meds and hears his pets talking, in “The Voices.” (Lionsgate)
Entertainment

Jerry's off his meds, and his cat is talking
By Joe Bendel

Do you think talking cats are cute, like Garfield? Well, think again.

Anthropomorphism can be a sinister business; but don’t worry, talking dogs are still cool. Regrettably, poor luckless Jerry Hickfang hears them both in Marjane Satrapi’s The Voices.”

Forklift-driving Hickfang is clearly trying too hard to be liked by his co-workers at the Milton faucet and bath factory, but he seems harmless enough. Of course, they do not hear the conversations he has with his cat, Mr. Whiskers, and his loyal canine, Bosco.

Mr. Whiskers does not suffer fools gladly. In fact, he is all in favor of killing them

Mr. Whiskers does not suffer fools gladly. In fact, he is all in favor of killing them. In contrast, the dim-witted but affectionate Bosco always tries to find the best in people. Fortunately, good old Bosco can usually counterbalance Mr. Whiskers’s devilish influence, but it gets difficult when Hickfang is under emotional stress.

Despite what he tells his court-ordered psychiatrist, Hickfang has gone off his meds (hence the conversations with his pets). To make matters worse, getting the brush-off from Fiona, the British office sexpot, will hardly help his mental stability.

Still, Lisa, her slightly more demur office mate, continues to carry a torch for him. She might be his perfect match, but it is hard to envision Hickfang developing a healthy relationship, especially when we see his apartment without the happy haze of his dementia.

Along with “Mississippi Grind” at this year’s Sundance, “The Voices” ought to give Ryan Reynolds’s career a new lease. If nothing else, he ought to be able to find plentiful cartoon voice-over work, because his voices for Mr. Whiskers and Bosco are terrific. Who knew he could do such a pitch-perfect snippy Scottish accent for the former?

He also does quite an impressive job conveying Hickfang’s naïve earnestness, along with his mounting mania. He is a tragic monster, in the Lon Chaney Jr. “Wolf Man” tradition, who does not want to kill but puts himself in that position through his own disastrous, but understandable, decision-making.

Frankly, it is hard to understand why it takes Hickfang so long to notice Anna Kendrick’s Lisa, but she definitely adds to the film’s energy and chemistry. Yet, the X-factor might be Jacki Weaver, who adds considerable humanity and authority to the film in her relatively brief turn as the overworked Dr. Warren.

It is hard to imagine that this is the same Satrapi who made “Persepolis” and “Chicken with Plums,” but she displays the same eye for visuals, employing color in bold and distinctive ways. When she contrasts Hickfang’s lunacy-tinged perspective with the film’s objective reality, it is quite effective. Cinematographer Maxime Alexandre gives it a warm, stylish sheen that somehow manages to feel slightly off, in the right way.

On paper, it all might sound rather sad and grubby, but it is actually a rather elegant little macabre tragedy. Recommended for genre audiences and fans of Reynolds and Kendrick, who want to see these thespians in a radically different context, “The Voices” opens this Friday, Feb. 6, in New York at the AMC Empire.