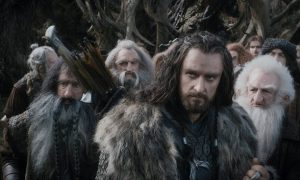 Peter Jackson: Two Groundbreaking Trilogies in the Bag, No Sweat

Film Review: 'The Hobbit: The Battle of The Five Armies'
By Mark Jackson
biggersmaller
Print

Peter Jackson made zombie movies so studios could see he had the right stuff to handle J.R.R. Tolkien’s universe. So began his Hero’s Journey.

“The Lord of the Rings” and now “The Hobbit,” two massive film trilogies describing Hero’s Journeys (Frodo’s and Bilbo’s), have become his crowning body of work.

The completion portion of a Hero’s Journey is known as bringing the gold back to the village compound. Jackson, with “The Battle of Five Armies,” brings two massive trilogies to a resounding finale, perfectly links both, and leaves his audiences vastly cinematically enriched. His every set piece, costume, and character have done Tolkien proud.

Ahem—except for the character Radagast the Brown. Every time this buffoonish dingbat wizard showed up in “The Hobbit” with his Python-esque earflap hat, crossed eyes, and hopping-bunny sled, the reviewer silently cursed Jackson, wishing to throw rotten tomatoes. In the books, Radagast is more of a wilderness-survivalist ranger-type wizard, you see.

But never mind all that. Perhaps, like Indian women intentionally weaving one flaw into every tapestry (due to the notion that humans cannot produce perfection), Jackson put a clownish Radagast in there for the same reason.

By the way, speaking of bringing back gold, that giant sucking noise you’ll soon be hearing is Warner Bros. hoovering up a billion dollars worldwide, just like the previous films hauled in. Why? Because this one’s the best in the series.

A Fire in the Sky

This third and final “Hobbit” installment picks up right where the last one left off: Smaug the dragon (voiced by Benedict Cumberbatch) is having a dragon-sized tantrum, spewing mass arson, and razing Lake-town to fizzling embers.

If ever a set piece begged the lyric “Smoke on the water, a fire in the sky”—this was it. The Master of Lake-town should’ve hollered that from the bell tower, with an orchestral-score nod to that 1972 Deep Purple hit. That would have beat all Radagast shenanigans hands down. You’re welcome.

Now, normally, starting with that big a bang leaves a film with nowhere to crescendo to. Not this Hobbit film. Not even close.

Dwarf-king Thorin (Richard Armitage) swoons with “dragon sickness” (greed) for all his ancestor’s reclaimed gold and jewels lying around, with no dragon squatting on it.

This condition stems mainly from not finding the brick-sized, opalescent Arkenstone, cornerstone of the entire dwarvish kingdom. Because Bilbo is hiding it.

Thorin becomes ever so evilly truculent, not to mention possessed, and starts breaking promises and declaring war. Which is very annoying to Bard and the good people of Lake-town, as well as elf-king Thranduil (Lee Pace), who rides an elk with double-wide moose antlers, and whose own fey, elfin snootiness is very annoying in and of itself (but still not as annoying as Radagast the Brown).

Meanwhile, out at castle Dol Guldur, Dark Lord Sauron’s got wizard Gandalf the Grey hanging from a parapet in an iron birdcage.

Unluckily for Sauron, Gandalf intones spells, surreptitiously summoning his gang, the White Council. But then Sauron responds by getting his own gang, the nine Nazgul (undead, zombified former kings of men). Soon we’ve got a Middle-Earth Sharks vs. Jets rumble.

Wherein the CGI is stupendous! And while we all had the sneaking suspicion, early on, that you don’t ever, ever, ever want to mess with Galadriel (Cate Blanchett)—when you see this film, you’ll know exactly why your premonitions were correct. Blanchett blows the roof off.

This sets us up for Peter Jackson’s best thing: a massive, sense-rattling, standing-on-the-shoulders-of-Spielberg, outrageous battle scene (the battle for which the movie is named). It’s a doozy.

It’s supposed to be “The Battle of Five Armies,” but it’d be more correctly called The Battle of Twelve Species: You’ve got dwarves, men, elves, orcs, wargs (wolves), eagles, trolls, goblins, horses, bats, gigantic “Tremors”-type worms, and a partridge in a … make that one enormous, armored Kunekune pig that King Dain (Billy Connolly), relative of Thorin, waddles in on.

This red-mohawked Dain and his hog: Harley-Davidson owners everywhere will appreciate his style. Especially how he eshews the helmet, bareheadedly head-butting iron-helmeted orcs and knocking them the heck out.

While Luke Evans as Bard is a dashing new Viggo Mortensen, Orlando Bloom’s Legolas is putting on weight. It’s a good thing the whole series has wound to a close while everyone’s still good-looking. We still get some excellent Legolasness out of him, like bat riding, and navigating a torrent of falling rocks in the manner of a gravity-defying stepladder.

All in all, though, it must be said that “The Lord of The Rings” (LOTR) was the true masterpiece, with “The Hobbit” trilogy falling somewhat short. Which is probably why Viggo Mortensen decided to stay away.

There was a lot of publicity concerning the 3-D and the 48-frames-per-second shooting. The result is not spectacular; it’s just nice, detailed CGI. But LOTR already wowed us with Gollum CGI, while also benefiting from the best of low tech.

For example, the overreliance on graphics takes the edge off the two fully computer-generated orcs in “The Hobbit,” Azog the Defiler and Bolg. When you put their pasty-white CG skin up against the gnarly, black-brown prosthetic makeup of the behemoth Uruk-hai of LOTR, they (ahem) pale in comparison in the magnitude of their shock value.

Lastly, there’s the issue of one small book having been chopped into three movies. We all already know that integrity tends to get compromised in showbiz for the bottom line, right?

On a positive note, in this last film, Jackson neatly brings the story right back, full circle, to the start of “The Fellowship of the Ring,” his first movie. Now, enviably, when newcomers to the series watch all of them in order, there will be a progression from pretty good to awesome.

Finally—all hail Peter Jackson. Bravissimo. What did he accomplish? He gave filmgoers the premier enlightenment story of our modern times.

That’s the real reason these books and movies are so popular the world over. They’re a taproot leading to the underlying reasons of human existence.

The evil One Ring is symbolic of all human addictions and attachments. It had to be destroyed, and much pain endured (karmic debts paid) before the ring bearers—Bilbo and Frodo—could find inner peace.

In the end, they journeyed into the west (a heavenly paradise) with the elves, having reached a high state of moral purity, meaning they would never again have to return to Middle-Earth.

The big battles in “The Hobbit” are fun, but so are those in, say, “Braveheart.” What sets J.R.R. Tolkien and Peter Jackson apart from all the rest (regardless of Radagast the Brown) is this classic, timeless story of the human attainment of spiritual enlightenment.