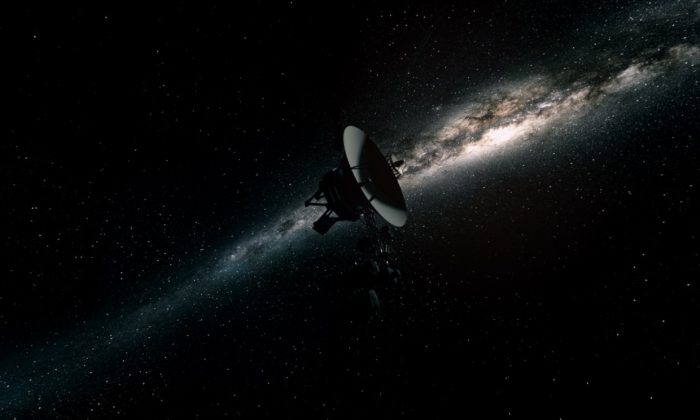 For many, the Voyager Program is best remembered as the inspiration for the rogue probe V’Ger in “Star Trek: The Motion Picture.” That is rather sad, because but its true legacy is much more significant. There were only two Voyagers launched, but they radically reshaped our vision of our galaxy. The scientists who were and remain involved in the Voyager Program explain their challenges and breakthroughs in Emer Reynolds’s “The Farthest,” which screens during the 2017 Tribeca Film Festival.

In 1977, the planets literally aligned, allowing the Voyager probes to fly in close proximity past Jupiter, Saturn, Uranus, and Neptune, as well as several of their respective moons. It was an opportunity that only occurs once every 176 years or so, but fortunately, President Nixon had the foresight to authorize the program in 1972 (say what you will, but RMN generally “got” the space thing). Despite the subsequent administration changes, NASA managed to stay the course, launching first Voyager 2 and then Voyager 1, to the utter bafflement of the media.

Relying solely on interviews with surviving Voyage team members, archival media, and NASA footage, Reynolds chronicles the immense drama of each planetary pass. Frankly, it is remarkable just how much of the planetary images we now take for granted came from the Voyagers. Uranus and Neptune in particular were basically just white and blue dots in the sky. Viewing them through terrestrial telescopes was a lot like observing Iceland through binoculars from the coast of Maine.

Yet, the Voyagers keep going, carrying the “Golden Record” of music and greetings from the people of Earth to maybe nobody or perhaps beings we can only imagine.

Arguably, the Voyager Program is more intrinsically big-picture-speculative and purely scientific than the Apollo Program (one small step, what’s not to get?), so it really ought to be addressed in more philosophic and frankly poetic terms.

Fortunately, Reynolds and the Voyager veterans are more than equal to the task. Indeed, “The Farthest” is an unusually eloquent documentary that puts the truly cosmic proportions of the Voyagers’ journey into perspective.

“The Farthest” is also extraordinarily cinematic, especially by doc standards, thanks to the captivating images provided by the Voyagers themselves, as well as the CGI renderings of the probes in flight. The Voyager scientists and technicians are also tremendously insightful, often offering up surprisingly poignant memories of the mission (particularly the planetary pass overshadowed by the Challenger tragedy).

Reynolds’s doc will also bring back fond memories of Dr. Carl Sagan (whom many primarily remember from the classic “Cosmos” series, but was a real deal astrophysicist) and the recently departed Chuck Berry (whose “Johnny B. Goode” was included on the Golden Record and played at the final-pass party). You could say Berry had more global and galactic perspective than the Beatles, who refused to license any of their songs for the Golden Record (in contrast, Pink Floyd were willing to license “Us and Them” for Earthly use in the documentary).

This is simply an exceptional documentary. It is often visually spectacular, but its mind-expanding scope is even more impressive. Sadly, it is impossible to imagine a project like Voyager getting green-lighted in today’s political and media environment, which is truly impoverishing.

American filmmakers should also be a little embarrassed it was an Irish crew that documented this endeavor on the big screen, but Reynolds deserves credit for recognizing its inherent drama and fascinating implications.