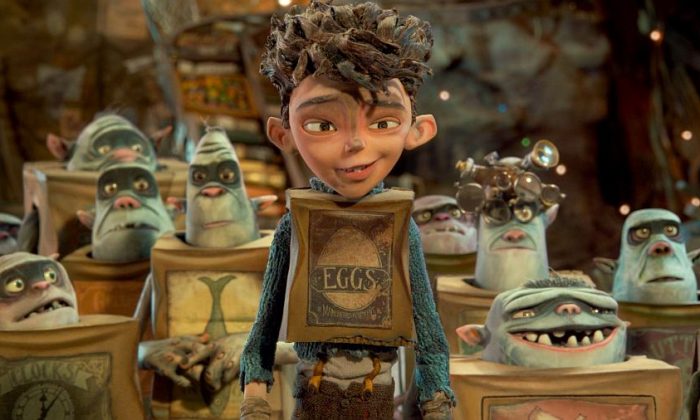 Eggs (voiced by Isaac Hempstead Wright) is surrounded by his Boxtroll friends in “The Boxtrolls.” (Laika, Inc./Focus Features)
Entertainment

They are total squares, but good guys usually are. The question is whether these subterranean tinkerers can change their nature. They will have to if they hope to survive a rogue exterminator in Graham Annable and Anthony Stacchi’s “The Boxtrolls,” the latest stop-motion feature from the Laika animation studio.

The humans live in vaguely Victorian Cheesebridge, while the Boxtrolls live in the tunnels below, demonized by the ignorant people above. Venturing up only at night, the preternaturally handy Boxtrolls survive by fixing up cast-off items and scavenging from the garbage. Unfortunately, their numbers are dwindling ever since the Dickensian Archibald Snatcher declared war on the Boxtrolls in hopes of joining the White Hats, Cheesebridge’s ruling elite.

When confronted by humans, the Boxtrolls instinctively play possum, retracting their heads and limbs into their boxes, turtle-like. Eggs is the exception. His body does not work the same way because he is actually a human boy adopted as an infant by the gentle Boxtrolls. To avoid extinction, the other Boxtrolls will have to become more like Eggs, before Snatcher finishes his grim business.

Yes, there is a genocide theme running through “The Boxtrolls,” which is always fun stuff in a children’s film. Frankly, the treatment is probably too heavy-handed for parents who try to shelter their children, and presented too glibly and off-handedly for those who like to challenge their kids. Tonally, “The Boxtrolls” is just bizarrely half-pregnant.

Nevertheless, the artistry of the Laika animators is undeniable. The expressiveness of the figures and the richly realized details of their world are quite impressive. It is a shame that a little bit more effort was not dedicated to the story, loosely adapted from Alan Snow’s “Here Be Monsters!” Just once it would be nice to see the adults recognize the glaringly obvious merit of their young ones’ warnings, especially for a total creep like Snatcher, but that will not be happening this time around.

Ironically, some of the cleverest bits in “The Boxtrolls” come toward the end, so if you go, stick with it. As is often the case, the 3-D has its moments but probably is not worth the surcharge. If you appreciate the art of animation, then it is quite a feast; but as a discrete film, it is not the most well-balanced meal. If animation is bacon, consider it Atkins-friendly.

Possibly too intense for small tykes, “The Boxtrolls” is recommended for stop-motion fans when it opens Friday, Sept. 26, in a variety of New York theaters, including the AMC Empire.