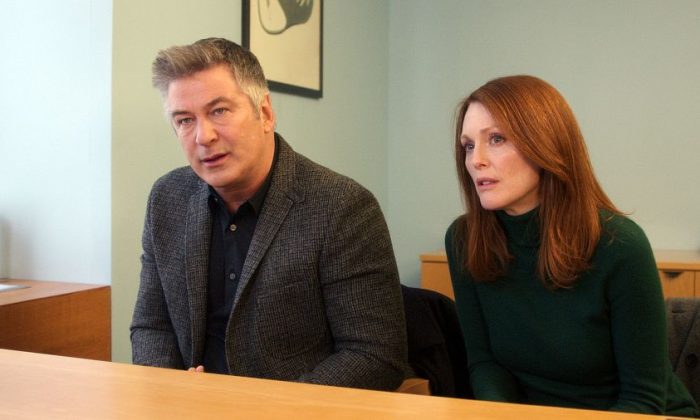 Linguistics is about articulation. With neurodegenerative Alzheimer’s disease, one loses the ability to articulate.

So when Dr. Alice Howland (Julianne Moore), a linguistics professor at Columbia University, in the too-real-for-comfort “Still Alice” becomes afflicted with early-onset Alzheimer’s—it’s ironic and paradoxical. As Alice says, “I was always defined by my articulation.”

Alice, a Type-A who enjoys the stress of having it all, has her 50th birthday feted by family at an upscale New York establishment.

Alice has enjoyed, up till now, a tenured professorship at a top-shelf school, good health, good looks, a highly intelligent and good-looking family, a good-looking brownstone, money, and the love and pride of her chosen profession.

And then, at 50, she notes more than a few “senior moments” creeping in. She loses her bearings on her daily campus jog, she loses track of the bathroom’s whereabouts at home, and she forgets appointments.

Suspecting a brain tumor, she sees a neurologist who, during their disquieting office visits, asks her (among other tests) to repeat back to him “John Black, 42 Washington Street” five minutes after he says it. She can’t.

She’s told hydration is good for memory. There’s an MRI. She’s told to bring along a close family member who knows her well.

Turn’s out she’s got a rare form of Alzheimer’s. It’s genetic, and the kids have to be told. Turns out, one has it, one doesn’t, and one doesn’t want to know.

Mostly, “Still Alice” is about watching Alice experience her deterioration. Smart and ambitious, she naturally refuses to take it lying down and constantly reassesses her situation, coming up with ways to compensate.

Moore’s is an understated, minimalist performance, and the tiny increments by which the disease encroaches are slightly reminiscent of the horror genre, where the specter in the background flits by so quickly it almost goes undetected, except that you know you saw something, and that’s slightly hair-raising. These “What did I just see?” moments unsettle because one senses that’s how it would realistically go down.

Speaking of real, the catty sibling rivalry between the two pretty but personality-wise diametrically opposed sisters hits all the right notes, as does the changing relationship between Alice and prodigal daughter Lydia.

The classic, mildly contentious mother-daughter debates, in which Alice tries to manipulate Lydia toward getting a college degree and some security (instead of her chosen Rogues & Vagabonds career), ring true.

As Alice’s mind cracks, cracks likewise show up in the marital tectonic plates. John wants to take a new job opportunity in Minnesota; she wants him home for one last year while she’s still herself.

Young Lydia’s required to ditch her L.A. auditioning and return East, while dad flees in the other direction to the Midwest, but not before telling Lydia, “You’re a better man than I.”

The storyline wherein Alice surreptitiously sets up suicide procedures and makes an “If you’re seeing this, it means you can’t pass the tests anymore” video (we’ve seen a million of them) almost feels like it belongs in another film genre.

At the end, Lydia, taking care of mom now, reads her a monologue from the Tony Kushner play “Angels in America.”

“What do you think that was about, Mom?” she asks.

It’s particularly the scenes between these two throughout the movie that capture the essence of how Alzheimer’s, while it takes away one person, can also give you another.

This other, newer person might be a sort of distilled essence of the previous person’s being, and that might be childlike and wondrous and remind us that life works in mysterious ways, like how the forgetting of the superficial can reveal a true self who remembers what’s truly important.

The rest of this crew of actors can’t be faulted, across the board, though one senses it might have been more advantageous to cast a lesser-stature star than Alec Baldwin. The old saw goes “there are no small roles,” but regardless, the role just simply feels too small for him.

“Still Alice” is 70 percent portrait of a disease and 30 percent family drama, recommended as preparation, familiarization, and demystification for families affected by Alzheimer’s, and for fans of both Julianne Moore and Kristen Stewart.