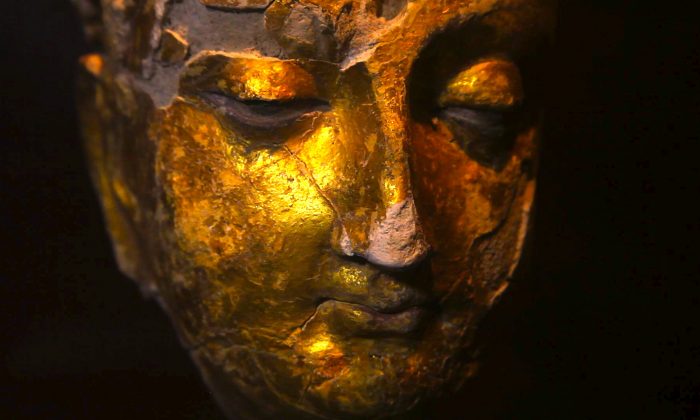 One of the treasures at Mes Aynak. (German Camera Productions)
Entertainment

Wake-up call for the civilized world
By Joe Bendel

It is an ancient Silk Road settlement dating back centuries, but it is built upon the ruins of a 5,000-year-old Bronze Age community. Its archaeological significance is incalculable, but it is slated to be destroyed by a Chinese mining community. The fate of Mes Aynak ought to be a leading issue in this interminable presidential election, but our major party candidates either don’t care or were probably on the take from the start.

Filmmaker Brent E. Huffman sends the world a warning of what we stand to lose and how close we are to losing it in “Saving Mes Aynak,” which released recently on DVD, from Icarus Films.

Geography has placed the Mes Aynak site between a rock and a hard place. It is situated above a vast copper deposit, in prime Taliban insurgency territory near the Pakistani border. Having secured a mining contract (amid widespread reports of bribery and corruption) the China Metallurgical Group (MCC) still very much plans to blast an enormous crater in the ground where archaeological teams now race to excavate the remains of Mes Aynak.

Nothing they uncover that is not portable will be preserved. They can only document humanity’s losses as best they can.

The fact this is happening in the country where the Bamiyan Buddhas were obliterated is not lost on anyone. In fact, the prospective PR disaster is probably the only reason the destruction of Mes Aynak has been put on hold for several years.

It is also a film that needs to be widely screened for Americans.

However, the archaeologists still face the risk of jihadists wishing to destroy Mes Aynak for reasons of Islamist intolerance (as did Huffman and his crew).

It is therefore no exaggeration to call Afghan archaeologist Qadir Temori the hero of the film. The devout Muslim family man does his best to oversee work at Mes Aynak every day, despite the very real threat of violence (including rocket attacks) as well as constant funding shortfalls. Frankly, he and his colleagues should be considered heroes by all civilized people.

“Saving Mes Aynak”  is short, but it makes its points loud and clear through straightforward reporting. The film’s conciseness could indeed be a virtue for Huffman and Kartemquin Films, who promoted free online screenings of the film for all interested Afghan citizens earlier in the year.

It is also a film that needs to be widely screened for Americans as well. You probably did not think over two thousand American lives were sacrificed in Afghanistan so that China could raze one of the world’s great heritage sites, but apparently, that is the state of things—and the current administration (and those seeking to succeed it) have no objections (tellingly, a search for “Mes Aynak” on the White House website yields no results).

Very highly recommended, “Saving Mes Aynak” is persuasive portrait of courage and an infuriating indictment of utterly pointless barbarism, and deserves a much wider audience. The stunning visuals of the site itself are also definitely worth seeing, especially since they might not necessarily be there in the future.