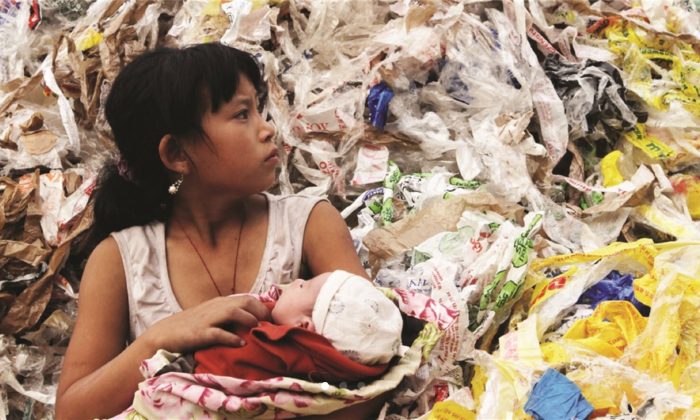 In China, they recycle plastic, but throw away lives.

China is the leading importer of plastic waste from the West, but education is a luxury, dependent on factors like family income and geography. The savage inequalities of contemporary China are inescapably evident in the lives of the workers at a Shandong recycling plant, whose routines and travails are captured in Wang Jiu-liang’s documentary “Plastic China,” screening at the 2017 Sundance Film Festival.

The hollow words of Chairman Mao constantly echo throughout the film.

What you discard might end up in Kun’s struggling recycling plant. The owner labors like a mule, but his employee Peng mostly comes across like a lazy drunk.

Frankly, Peng’s 11-year-old daughter, Yi-jie, has a much greater work ethic. She seems to have assumed most of the family’s child care duties to relieve her constantly pregnant mother, but also does her share of plastic sorting.

Both Kun and the audience can plainly see the responsible-beyond-her-years Yi-jie should be in school, but the useless Peng spends most of the family’s money on drink. Obviously, the idea of simply enrolling her in public school is completely foreign in this province. It would cost Peng a considerable tuition fee under the best of circumstances, but the fact they are ethnic Yi from Sichuan Province, without proper residency permits, presents further complications.

Wang’s previous documentary was the environmental horror show “Beijing Besieged by Waste,” so it would seem he has a perverse affinity for dumps and waste-processing facilities.

However, “Plastic” is very much focused on its human subjects. Yi-jie quickly emerges as Wang’s focus, and viewers will earnestly root for her. She is a hardworking, sensitive kid who deserves a future, but it is not clear whether she will have one.

While Wang’s approach is strictly observational, he clearly takes sides in the recycling plant’s conflicts. Of course, it is difficult to fault him for aligning with youthful innocence and virtue.

On the other side of the spectrum, the myriad flaws of both Kun and Peng are mercilessly exposed for the audience to pass judgment on.

Still, life is hard for everyone in “Plastic”—and it only gets harder. For extra, added irony, the hollow words of Chairman Mao constantly echo throughout the film.

“Plastic” has been shoehorned into Sundance’s environmental theme this year, but even if the recycling plant were pristine and carbon-neutral, it still would be no place for a child with Yi-jie’s potential. After meeting her on-screen, you might be tempted to trash some plastic toys in hopes they might reach her, but that is about as likely as successfully delivering a message in bottle.

What she really needs are a more equitable educational system and fairer residency regulations.

Recommended for its human drama and the genuine outrage it inspires, “Plastic China” screens through Jan. 27 in Park City, as part of this year’s Sundance Film Festival.