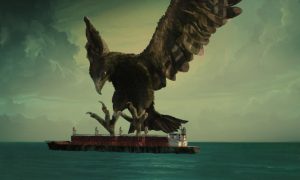 Some of J.M.W. Turner’s most famous subjects include Hannibal traversing the Alps and a study of sea monsters (or perhaps just fish, as the Tate prosaically insists), but he is best known for the maritime scenes that are now considered an early bridge to Impressionism.

He was widely celebrated in his own lifetime, yet popular and critical opinion varied considerably, especially in his twilight years. Mike Leigh and his frequent ensemble player Timothy Spall lovingly paint a portrait of the artist’s irascibility in “Mr. Turner,” which screened as a Main Slate selection of the 52nd New York Film Festival.

By the late 1820s, Turner was a recognized master, who could get away with considerable eccentricities during the Royal Academy of Arts’ annual exhibitions. Despite a brief affair yielding two illegitimate daughters he had no use for, Turner was not much of a ladies’ man. He lived a bachelor life with his doting father, up until the senior Turner’s death, occasionally exploiting the unrequited affections of their housekeeper, Hannah Danby, the niece of his former mistress.

However, a halting romantic relationship slowly develops between Turner and Mrs. Booth, the twice-widowed proprietress of a lodging-house in Margate, the coastal village that inspired many of Turner’s paintings. They find some late-life happiness secretly cohabitating, even while Turner struggles with his declining health and the slights of the jealous establishment and fickle public.

Structurally, “Mr. Turner” initially seems rather episodic, skipping somewhat haphazardly down the last two decades of Turner’s life, but a bigger picture slowly slides into place. Granted, there is still a lot of character development coloring in the 149-minute running time, but those are usually the best parts.

J.M.W. Turner might well be the role Spall is forever linked to, like Sir Ben Kingsley and Gandhi. It is a virtuoso performance, but it is also great fun, especially when Turner slyly hams it up at Academy gatherings. Inevitably, someone will edit together a master-cut of all his grunts and guttural noises, which are rather eloquent within the film’s dramatic context.

Marion Bailey also takes an exquisitely sensitive and dignified turn as Mrs. Booth, and Dorothy Atkinson piles on the pathos as poor cast-aside Hanna Danby. But after the contributions of Spall and Leigh, it is the work of cinematographer Dick Pope that most defines “Mr. Turner.” At times, the characters walk through landscapes that shimmer like Turner canvases, bringing to mind Lech Majewski’s “The Mill & the Cross.”

Obviously, “Mr. Turner” is more closely akin to Leigh’s Gilbert & Sullivan biopic “Topsy-Turvy” than his stridently class-conscious films. There is even a pronounced strain of elitism to be teased out of Turner’s story, yet it is consistently forgiving of human foibles. It rather logically follows that “Mr. Turner” is also one of his most inviting and accessible films.

A strong Oscar contender for Spall (and probably for Pope too), “Mr. Turner” is recommended for patrons of fine art and British cinema when it makes its limited release debut in December.