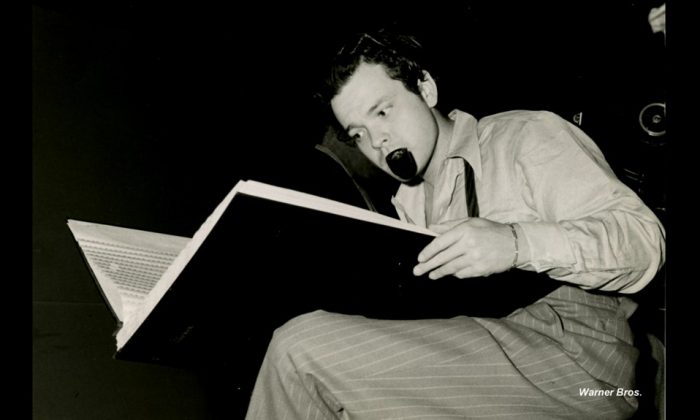 Just imagine what might have been if Orson Welles had worked in the digital era. Probably no other filmmakers left behind so many unfinished yet potentially great films. As his latest video-biographer Chuck Workman documents, Welles had no shortage of work ethic. It was simply a lack of everything else, particularly money.

You may have heard this story before, but Workman illustrates the great auteur’s rise and fall with a wealth of striking visuals and many rarely seen archival interviews. Welles gets the full Workman treatment in “Magician: the Astonishing Life & Work of Orson Welles.”

Welles was a precocious but never small child. Evidently, in the Welles family, children had to be interesting performers, or they were banished to the nursery to be boring in private. Obviously, Master Orson was not about to be shunted away.

In a departure from many DVD-behind-the-scenes-extras, Workman patiently invests a bit of time up front on Welles’s formative years in Woodstock, Ill., where he honed his craft at the Todd School and the local Woodstock Opera House, whose main stage has since been renamed in Welles’s honor. Workman takes the audience there, and it does indeed look like fitting launching pad for Comet Welles—an intimate yet classy space that could fire a young genius’s imagination.

By the time Welles hit the New York theater world, he was practically a fully formed master. Workman breezes through his early Broadway triumphs and radio superstardom, essentially using the feature films to island-hop his way through Welles’s career.

At this point, the film starts to feel very familiar to anyone with a casual knowledge of Welles’s life and career. Yes, “Citizen Kane” is a masterpiece and “The Magnificent Ambersons” sort of is too, but according to Welles, RKO cut out the most important parts. However, Workman includes some fascinating interview excerpts with the late Oscar-winning Robert Wise, justifying the cuts he made at the studio’s behest.

“Magician” also incorporates tantalizing glimpses of films Welles started but never completed, such as “The Deep,” “Don Quixote,” and the technically finished but now mostly lost “Merchant of Venice.”

Frankly, this is some of the best material Workman collects, hinting at what might have been. It nicely complements Workman’s full visual portrait of the artist, which also directly addresses his larger-than-life celebrity status, as seen through clips of Welles’s guest appearances on “I Love Lucy,” “The Muppet Show,” and various chat shows and commercials.

There are not a lot of surprises in “Magician.” Frankly, you really have to stretch to find any new material at all in the film. Still, Workman and company make a convincing defense of Welles’s unfinished oeuvre, arguing that he was committed enough to start production, whereas most would-be filmmakers accept defeat in the development or pre-production stages.

“Magician” certainly makes you want to watch all of Welles’s films again, including the ones that we can’t, which means it probably accomplishes its goals, but it never feels as fresh as “Visionaries,” Workman’s relatively recent (stylistically traditional) survey of avant-garde filmmaking.

Recommended for Welles diehards looking for something to tide them over until the long-rumored release of “The Other Side of the Wind” (promised for the auteur’s centennial next May), “Magician” opened Wednesday, Dec. 10, in New York at the Lincoln Plaza Cinema.