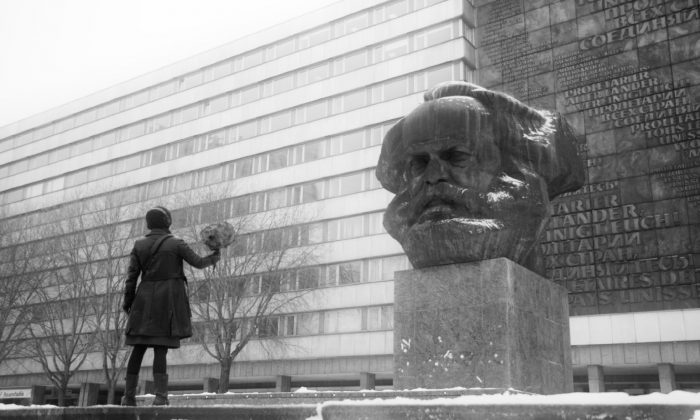 Michael Tucker often serves as the director of photography on the documentaries he co-directs with his wife and creative partner, Petra Epperlein, but he has an unusual co-cinematographer on their latest project: the dreaded East German Stasi. Archival surveillance footage from the old days of socialism eerily supplement and illustrate Epperlein’s painful family history in “Karl Marx City,” which screens at New York’s Film Forum.

Although she came from a loving family, Epperlein finds it hard to feel nostalgic for her childhood in what was then called Karl-Marx-Stadt. The city changed its name back to Chemnitz as soon as it could in 1990, but the painful legacy would live on, especially for her parents.

Epperlein gives us the rundown on the scope of the Stasi’s operations at the time of the fall of the Berlin Wall: 90,000 active agents and over 200,000 registered informants. The latter was particularly relevant to the Epperleins; her father started receiving poison pen letters accusing him of being a snitch shortly after reunification.

Eventually, the stress, guilt, resentment, and depression became too much for Epperlein’s father to bear, so he committed suicide, after burning all his letters and photos. Indeed, the extent to which he tried to erase all traces of himself was especially disturbing for his daughter, so she launched an investigation into her father’s relationship with the Stasi, to find if any existed. In the film, when she finally finds her answers, it is a bitter pill to swallow, but maybe not in the way we expect.

“Karl Marx City” is an unusually moving documentary that could even be called revelatory. However, it takes viewers a bit of time to adjust to Epperlein’s aesthetics. The black-and-white cinematography—stark and stylish in the case of Tucker, but just plain stark as far as the Stasi is concerned—is certainly apt and fittingly evocative.

However, the rather surreal scenes of Epperlein carrying oddly large boom mics seem distractingly absurd until we realize the exaggerated filmmaker persona is part of a defense mechanism. Slowly, Epperlein lowers her mask, allowing us to viscerally experience her family’s pain—and it stings.

Tellingly, Epperlein takes great pains to call out Florian Henckel von Donnersmarck’s “The Lives of Others” for creating a fictional good agent who protected his target, something that never happened in real life. While we generally take her point, it should be noted that the purpose of Ulrich Mühe’s character was not to absolve the Stasi but to indict it. This is what those 90,000 agents might have chosen to do, but they didn’t.

Regardless, “Karl Marx City” offers an absolutely fascinating look into lives of relatively average German Democratic Republic citizens and documents how the communist system continues to generate karma for everyone it touched.

“Karl Marx City” is challenging on many levels, but immediately accessible. It is definitely one of the head-and-shoulders highlights of this year’s Film Forum. Very highly recommended, “Karl Marx City” opens on Wednesday, March 29.