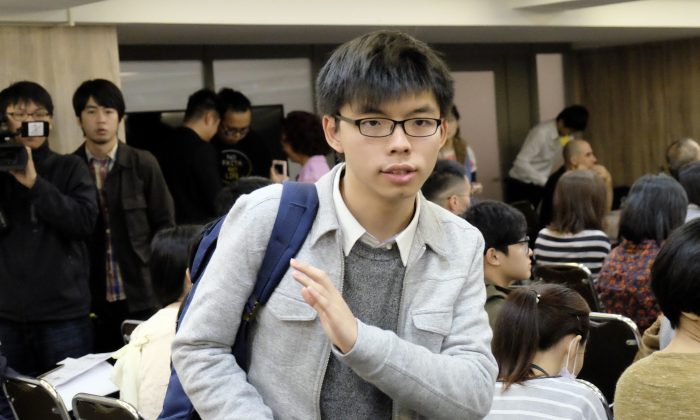 Mention the name “Joshua Wong,” and anyone vaguely interested in the Umbrella Movement and other pro-democracy protests in Hong Kong over the last four years will remember a skinny kid with rectangular black framed glasses.

The documentary moves chronologically from early 2012 to September 2016, and follows Joshua Wong through the highs and lows of activist and political career—the sit-in outside Hong Kong government headquarters in 2012 to protest a controversial school syllabus that Hongkongers denounced as communist indoctrination; the storming of the same government compound two years later which led to his arrest but also triggered mass street occupations; Wong’s painful but futile hunger strike in a last ditch effort to rekindle Hongkongers’ enthusiasm for the street occupations; and Wong’s fellow activist-turned-politician Nathan Law winning a seat in Hong Kong’s Legislative Council in 2016.

The 78-minute documentary also features interviews with Joshua Wong and his family, as well as his longtime activist buddies, and weaves in commentary from journalists, scholars, and a veteran figure in Hong Kong’s pro-democracy movement.

Producer Andrew Duncan had learned about Wong after meeting Matthew Torne, the director of a 2014 documentary about the protests against “national education” which featured Wong and another teenage activist. When the Umbrella Movement street occupations broke out in 2014, Duncan decided to tell the story of Joshua’s activist life, and connected Torne with Piscatella.

Piscatella was aware who Joshua Wong was, but got a much better sense of what Wong meant to Hongkongers during the filming in Hong Kong. “Everybody knew who Joshua is,” he said over the telephone. “There was a popularity and familiarity with him.”

During the Umbrella protests, Piscatella was involved in some scenes with Wong where the Hong Kong police used pepper spray and wielded batons. “Nobody was hurt, but it’s a moment as a filmmaker where you realize that there are real stakes here,” Piscatella said.

Joshua Wong is perhaps most conscious of what is at stake.

“The Communist Party of China interferes with the autonomy of Hong Kong, and erodes the universal values we believe in, be it human rights or future independence,” he said in a telephone interview.

Wong says that he’d have stood up to the Party even if there wasn’t an attempt by the Beijing-influenced Hong Kong government to introduce “national education” in Hong Kong’s schools.

“I may not stand in the frontlines as an organizer of a movement,” Wong said. “I may just be a normal petitioner. But I will still fight for democracy, even though my position may be different.”

Going by director Joe Piscatella’s documentaton of Wong’s day-to-day grind before shooting to fame—Wong speaking through megaphones and mics at busy street corners; Wong holding recruitment drives for his student activist group; and Wong attending school classes and going to church—there’s reason to believe in his straightforward idealism.

If there’s one angle missing in Piscatella’s storytelling, however, it’s the lack of nuance in explaining the Chinese Communist Party’s operations in Hong Kong.

In the documentary, Joshua Wong and several commentators view current Chinese leader Xi Jinping as the chief boogeyman behind Hong Kong’s recent troubles. But the political rivals of Xi control the power networks in Hong Kong, and have been deliberately stirring up trouble in the city to embarrass and undermine Xi—a phenomenon long reported by this newspaper that has been signaled repeatedly by a pro-Beijing Hong Kong newspaper in recent months.

But for Wong, Communist Party infighting doesn’t concern his own activism.

“I would say that no matter the conflict inside the ruling class or the Communist Party, it wouldn’t affect our persistence to fight for democracy,” he said over the telephone.

Joshua Wong’s single-minded dedication to the social movement in Hong Kong has already cost him the relatively more carefree days of a regular teenager—the documentary features a farewell party for Wong’s student activist group Scholarism where the youngsters toast to their “wasted youth.”

But Wong doesn’t plan to stop his activism until “Hong Kong is Hong Kong again.”

The world premiere for “Joshua: Teenager vs Superpower” was held at Sundance Festival 2017 in Park City, Utah on January 20. Public screenings of the documentary at Park City run till January 27.